SAN MARCOS — A 79-year-old bicyclist died after sustaining serious injuries Tuesday morning when he was struck by a vehicle at the intersection of San Marcos Boulevard and Via Vera Cruz.

The collision occurred around 9:15 a.m. and left the bicyclist with severe head and leg injuries, according to the San Diego County Sheriff’s Department. The 23-year-old driver was not injured.

While the man was transported to Palomar Medical Center following the collision, Sgt. Chuck Morreale confirmed Tuesday evening that the bicyclist had succumbed to his injuries.

The collision is currently being investigated by the San Marcos Sheriff’s Station. Drugs and alcohol did not appear to be a factor in the collision, sheriff’s officials said.

The intersection of San Marcos Boulevard and Via Vera Cruz was closed for around two hours as a result of the collision. 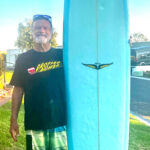 A cherished addition to my quiver