Malissa James, pictured here in 2019, was sentenced last Friday to life in prison without parole for the murder of Carlsbad resident Marjorie Gawitt. The Coast News/File photo

CARLSBAD — A transient woman who pleaded guilty to the killing of a Carlsbad resident who was stabbed more than 140 times was sentenced to life in prison without the possibility of parole on Feb. 4 in Vista Superior Court.

Last fall, Malissa James, 29, admitted to the March 11, 2019, murder of Marjorie Gawitt during a pre-dawn home invasion robbery at the victim’s home on Outrigger Lane.

James’ co-defendant, Ian Forrester Bushee, has entered a plea of not guilty and is scheduled for trial in May.

James pled guilty to avoid the death penalty, waiving her appellate rights and admitting to each of the special circumstances in the crime, including burglary and torture, according to Deputy District Attorney Bill Mitchell.

James admitted to stabbing Gawitt more than 140 times in the face, head, back and legs — none of which were fatal wounds — and the victim eventually died of blood loss, Mitchell said.

“It’s a horrendous crime that didn’t just impact the victim and her family members but the community as well,” Mitchell told The Coast News. “This crime has also caused people to distrust the homeless community.”

In the days leading up to the murder, both Bushee and James were residing in a homeless encampment just north of Agua Hedionda Lagoon located behind Gawitt’s home on Outrigger Lane, according to the Carlsbad Police Department.

Bushee and James allegedly broke into Gawitt’s home around 12:30 a.m. to commit a residential burglary while the homeowner slept.

As previously reported by The Coast News, Gawitt was awoken to James repeatedly stabbing her with a knife. The 68-year-old woman survived the attack long enough to call 911 but eventually died from her injuries en route to the hospital.

After stabbing the victim, both suspects fled in the victim’s car, which was later found abandoned at 5:30 a.m. on Grand Avenue in San Marcos, investigators said.

Bushee and James were arrested a few hours later at Park Drive and Neblina Drive, near the lagoon and just several blocks from the original crime scene. Police were alerted to Bushee and James’ whereabouts after a woman saw the pair hiding in a bush on Park Drive.

During a community meeting with the Carlsbad Police Department shortly after the murder, neighbors reported that Bushee and James allegedly burgled another home in the neighborhood prior to entering Gawitt’s residence. In 2018, Bushee and James were convicted of residential burglary as co-defendants in San Bernandino County and were still on parole at the time of Gawitt’s death.

After the murder, several neighbors said Gawitt, who was known by neighbors and friends as “Marj,” was a friendly, lovely and caring person. Family and friends of Gawitt also spoke during James’ two-hour sentencing hearing on Friday.

According to Mitchell, since James was Gawitt’s killer, Bushee, 39, is not a capital defendant but still faces a murder charge for his role in the slaying. Despite her guilty plea, James has insisted that Bushee was not present at the time of the burglary or murder and that he did not participate in the crime.

But James never explained why she stabbed Gawitt, which makes the slaying more concerning for prosecutors and the general public.

“We warn people that they should be very careful about making sure their doors are locked at night,” Mitchell said. 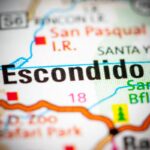 In a world of anxiety, stay attuned