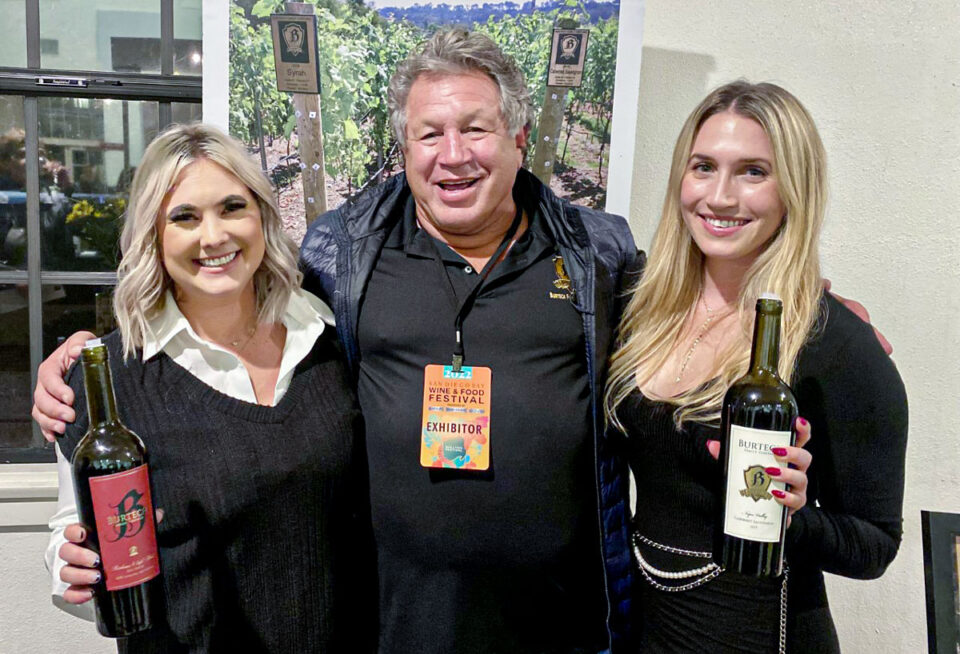 The San Diego Bay Wine & Food Festival returned last month for an iconic coastal celebration of wine, food and culture. While each of the six days was action-packed, the most significant days saw the Grand Decant, Grand Tasting and Grand Fiesta.

Frank and I were excited to see familiar faces and discover new wineries over the weekend.

Friday’s Grand Decant included over 100 wineries from all corners of the world, including Louis Latour from Burgundy, France, with most wineries hailing from Napa Valley/Sonoma, CA Central Coast, Temecula, and San Diego County.

When first entering the Grand Decant, we were able to catch up with Encinitas-based Burtech Family Vineyards. Burtech’s ’21 rosé is a 91-point Wine Enthusiast winner. We also saw Carol Shelton to enjoy her Monga Zin, one of Frank’s recent Top 5 discovery wines.

We also had a chance to enjoy wines from Temecula’s Falkner, South Coast Wineries and Howell Mountain Vineyards, where we were able to catch up with Mike Beatty and his winemaker Bryan Kane. Howell Mountain’s cab francs and cab sauvs always impress and the 2018s they were pouring maintained their tradition of excellence.

A limited number of guests were able to take advantage of the Grand Decant LUX area featuring premium wines and gourmet appetizers. Louis Latour, Chateau Montelena, and Steven Kent are a short list of premium wineries.

Louis Latour’s Mick Cameron, Western Regional Manager and Dannytza Rodriguez were a wealth of information as they walked us through tastings of their Chateau De Blagny Chardonnay with a floral nose with hints of citrus and grilled almond on the palate before we tried the Grand Cru Corton Charlemagne.

The Charlemagne vineyard faces southeast, providing maximum sun exposure in addition to late harvests making the Charlemagne a premium Grand Cru. We then shifted to reds for the Alexe-Corton Pinot Noir, followed by the Grand Cru Corton Grancey Pinot Noir. All four were delicious wines.

On either side of Louis Latour was iconic Chateau Montelena, famous for their winning at the 1976 Judgement of Paris. George Blankensee, Montelena’s estate director, was spoiling guests with library 2000 Cabernet Sauvignon.

On the other side was sixth-generation winemaker, Steven Kent Mirassou of Steven Kent Winery, indulging guests with their Livermore wines. It’s worth noting that his son, seventh-generation Aidan Mirassou, assists with winemaking.

While I was familiar with their wines, this was the first time I tasted them. The Kent tasting lineup included their 2019 L’Autre Cote Cab Franc, The Premier Cab Sauv, and Lineage Red Blend (90% cabernet sauvignon, 8% merlot, and 2% cabernet franc). Across from Kent Winery was Chef Ron serving duck fat smoked salt caramels, which was perfect with the Latour, Montelena, and Kent red wines.

Day 2 was the Grand Tasting. We were excited to see the premier Brandt Beef food section return this year. Ranch45’s beef sandwich on fresh bread was mouthwatering. Other restaurants of note throughout the Grand Tasting were ARLO, STK San Diego, and Solare.

Saturday also allowed us to visit wineries we missed on Friday. Those of note included Paso Robles’ Niner and Austin Hope, named Wine Enthusiast’s Winery of the Year, Sangiacomo with their outstanding 5 Clones Pinot Noir, and Rutherford Ranch.

Being a foodie, one of my Grand Tasting highlights was the interview with Wolf, Sub Zero, and Cove’s Corporate Chef, Chef Joel Chesebro. Chef Joel shared his thoughts on making cooking relaxing and therapeutic, especially during the holidays. He refers to this as Kitchen Therapy.

Third, make proteins simple and executable. He suggested that large pieces of meat should be prepared after coming to room temperature. For a standard-sized turkey (less than 16 pounds), this can take 3½ to 4 hours. Chesebro also advised resting meats before carving.

These two simple steps can make the difference between dry and juicy meats.

Fourth, he recommended using convection ovens. Convection ovens use a fan to distribute the heat resulting in more even cooking. If you’re in the market for new ranges, Wolf, Sub Zero, and Cove have premium convection ovens. Additionally, they offer warming drawers to keep food warm, freeing up your oven.

Those attending the 2022 San Diego Bay Wine & Food Festival did, in fact, “arrive at awesome.” I look forward to the event in 2023. Bravo to festival co-producers/owners Michelle Metter, Ken Loyst, and their Fast Forward PR Firm Team. More info at sandiegowineclassic.com.

— Flora Bar & Kitchen owner Sal Ercolano will conclude this year’s wine dinner series with another Napa Valley legend, The Prisoner Wine Company, famous for its bold and unconventional approach to winemaking. Four-course plus dessert wine dinners will be held starting at 6 p.m. on Dec. 14 and Dec. 15. The main course features braised short ribs paired with The Prisoner Cabernet Sauvignon. Dinner also includes sea scallop risotto. The cost is $85 per person plus tax/tip. RSVP at 858-461-0622.

— The world’s largest sporting event, FIFA World Cup Qatar 2022, is already well underway. But it’s not too late to grab a few bottles of wine from Vino Carta to support countries still in contention. Vino Carta is a neighborhood wine shop and bar focusing on small, family-run producers and natural wines made through organic and sustainable farming practices. They have locations in Little Italy and Solana Beach and stock a wide variety of international wines – perfect for cheering on your favorite team.