ENCINITAS — A man was killed by a train Wednesday afternoon after stepping onto the tracks at the intersection of Leucadia Boulevard and N. Vulcan Avenue.

According to Sgt. Jason King, the collision occurred at around 2:40 p.m. Deputies from the North Coastal Sheriff’s Transit Enforcement Unit responded to the scene where the man was pronounced dead. The man has not yet been identified.

According to a Sheriff’s department news release, a southbound Amtrak train was traveling at approximately 90 miles per hour when the man stepped on the railroad tracks in front of the train. The train went into emergency braking, but the train struck the male. Anyone with information about the case to call the Sheriff’s Department’s non-emergency line at  (858) 565-5200. 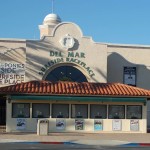 Fair to look at finance options for Surfside remodel