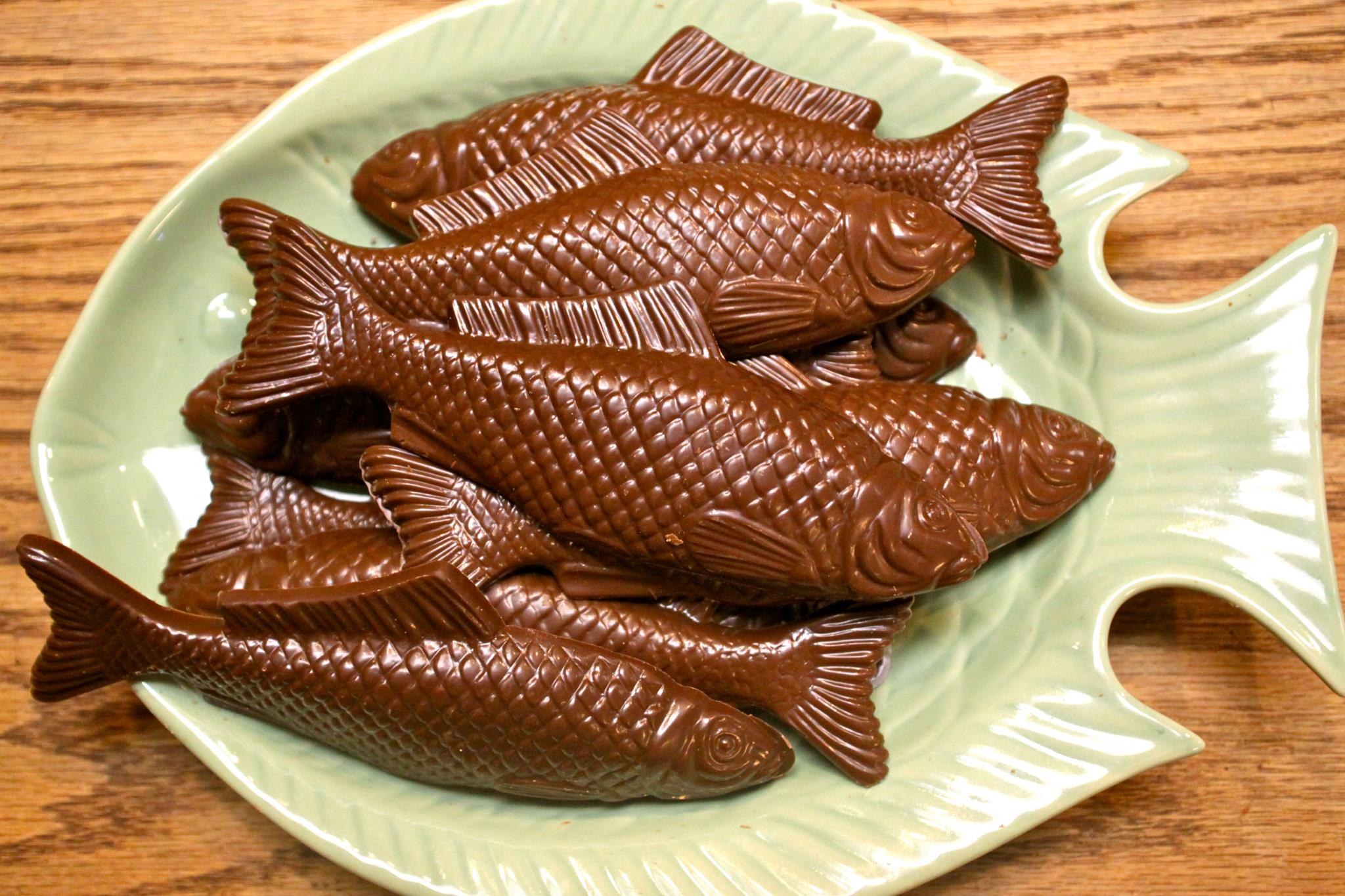 A “school” of fish-shaped chocolates from Grocer’s Daughter Chocolate company. Photo via Facebook

I had the opportunity recently to record a Lick the Plate radio interview in Northern Michigan at a small, family-owned business with a big love for craft chocolate called Grocer’s Daughter Chocolate.

At the beginning of each episode, owner and chocolatier Jody Hayden had me sample one of her amazing chocolate creations then went on to describe in detail the ingredients and passion that went into creating it.

It had been a while since I had experienced this quality of chocolate and to bite into truffles and caramels that were made with such care and local ingredients reminded me what a glorious experience really good chocolate can be. I was flying high coming out of that interview and decided it was time to up my game when it comes to chocolate knowledge. You can check out Grocer’s Daughter and order online at www.grocersdaughter.com .

I should note that I also had another fabulous chocolate experience recently when I was given a box of Swiss chocolate. Evidently they source from the same areas as other chocolate makers yet their cows produce a denser, less aerated milk due to the altitude and the milk they produce is known as Alpine milk and a big reason for the smoothness of the chocolate.

I’ve covered chocolate in the past with a story I did on Encinitas-based Chuao Chocolatier, but since then had not really sought out quality chocolate or taken the time to educate myself on it. With that, I did some research and wanted to share some highlights from what I discovered.

First off, chocolate comes from the Aztec word “xocolatl” which means bitter water. Luckily, the chocolate we now know and love is a far cry from the unsweetened drink the Aztecs used to imbibe. Chocolate is one of those treats we crave, it’s comforting, and as I found out, a bit confusing. So many different percentages and labels, like milk, dark and white chocolate to name a few.

Chocolate is made from the cocoa beans of cacao trees, which are cultivated in Hawaii and in the areas of the world 20 degrees north and south of the equator. Cocoa beans (seeds) and pulp are fermented together, and then the fermented beans are dried before they are moved to chocolate factories. While beans from different places used to be combined together to make chocolate, there are now also “single-origin” chocolates, which means the beans came from one place.

The beans are cleaned and roasted. To remove the husks from the beans, air is blown onto them and the roasted beans shatter into fragments called cacao nibs. The nibs are ground into a paste called chocolate liquor. This liquor, which is composed of about equal parts cocoa butter and nonfat dry cocoa solids, is used as the base for other types of chocolate products where other ingredients such as milk or sugar are added.

At the end of all this conching occurs where machines with rotating blades blend heated chocolate liquor to remove moisture and acid while more cocoa butter and sometimes lecithin are added for texture. The chocolate is cooled, then poured into molds. That’s the basics.

While more expensive chocolates are usually higher quality, you really should use your own judgment and taste when purchasing. Buy what you like and also cook with what you like. Try to buy chocolate with at least 54 percent cacao, and you’ll want to use the best quality chocolate you can afford in recipes where the chocolate flavor really shines like in truffles or chocolate sauces. Go for cheaper chocolates when baking and adding lots of other ingredients and flavors.

I will wrap this one up with the added bonus that some studies have shown that dark chocolate has plenty of health benefits when consumed in moderation. A new prize given by our founding partners, Maricel Presilla, Martin Christy and Monica Meschini. The Triple MMM (or Mmm ) prize represents products chosen by the founders and Grand Jury because of a personal appreciation of a product tasted during judging. This prize reflects personal enjoyment of the product awarded and is not based on the competition scores.
By the way! The best essay writing service – https://www.easyessay.pro/
And Happy New Year!