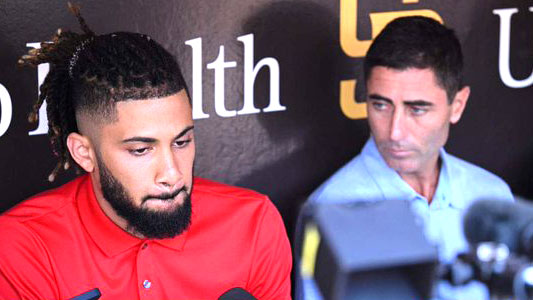 Fernando Tatis Jr., left, speaks to the media on Tuesday, with Padres GM A.J. Preller looking on. Photo via Twitter

It came without a pitcher on the mound nor was it accompanied by one of Tatis’ signature bat flips. There was no cheering crowd marveling over their goose bumps, with Tatis connecting with very few souls in Petco Park.

“I have made mistakes, but I’m going to learn from them,” Tatis said.

Tatis came clean after a dirty drug test revealed he had ingested a performance-enhancing drug that drew an 80-game suspension from MLB. He finally met with the press since the stunning news broke on Aug. 12, facing the music that was far from a happy tune.

“This is the most terrible time of my life,” Tatis said. “It was a stupid mistake; it was me being reckless.”

His redemption tour was in full gear, as he also spoke with his disappointed teammates. This came after he had apologized to general manager A.J. Preller and presumably bowed his head in shame toward Padres owner Peter Seidler.

“I have let so many people down,” Tatis said. “I have lost so much love from people. I have failed.”

But he won on Tuesday by being contrite and trying to convey a sense of understanding of the fallout from him cutting a corner. He stood by his tale of treating ringworm with the banned substance, which is commendable if still not wholly believable.

The truth is Tatis took a giant step forward, a piece of footwork that eclipses the little shuffle he does before touching third base on homers. The process was difficult, and it required Tatis to squirm before the cameras as he asked for forgiveness.

“There’s no (one) other to blame but myself,” Tatis said. “I made a mistake.”

When winners lose, they accept it and learn from it. No one goes through life undefeated and that’s been proven time and again.

When losers lose, they point fingers at others or use mitigating circumstances as a crutch. The opportunity to grow is stunted by their lack of accountability.

If Tatis truly is remorseful, and to be fair his words are hollow at this point, then Tuesday could be a landmark day in franchise history. One can find the light in the strangest of places if they look at it just right, and just maybe after doing so much wrong, Tatis can once again shine.

Tatis’ past is clouded with him not agreeing to the club’s request to fix his compromised shoulder, him arguing with teammate Manny Machado in the dugout and by his poor judgement in riding motorcycles in the offseason that led to him breaking his wrist.

That’s all fine, but at 23 and possessing one of the richest contracts in baseball history, his maturation is coming at an odd time. Better late than never, but it’s clear Tatis can no longer play the “I’m a kid” card when he runs afoul of common sense.

Tatis blindsided every Padres booster by cheating, seemingly turning to a performance-enhancing drug for an edge. With Tatis flunking a drug test for a substance he claimed mistakenly entered his body, he won’t play this year and for a month or so next year.

“Wait until next year” is a common baseball chorus when a team is eliminated. But the Padres, in a rare position to make the postseason, are already spouting that about one of their best players.

Before he could return, Tatis had to come clean and we’re not referring to a sample in a beaker. Tatis did that while breaking news that he will have his shoulder operated on and will spend much of the offseason in San Diego.

This is about going forward, which should drive anyone looking for redemption.

Regardless of the past, the future of Tatis and Padres is cemented with his $340 million contract not expiring until after the 2034 season. Tatis will receive $36 million in each of the pact’s final six years.

Something else with an expiration date was forgiveness and the clock was running for Tatis.

Tatis needed to do something that has avoided him throughout his spectacular and abbreviated career and that is to act like a man. Like a man, it was past time for Tatis to be responsible for his actions.

Tatis saluted those who had, and continue to have, his back through all his missteps. He pointed affection toward his followers, many of whom are Little Leaguers who will never look at their prized Tatis Padres jersey in the same way.

The way back to their good graces is by words and actions. It comes from breaking from the past and, like any good man, acknowledging that a blunder was made and that it won’t happen again.

Tatis did force countless adults to have a serious discussion with children about the consequences of not playing by the rules. That their favorite player, Tatis, was more of a scoundrel than a superstar this season for reasons unrelated to throwing or catching a baseball is noteworthy.

But a bigger lesson can be delivered by revealing that a winner can lose and still forge on.

Is that Tatis’ narrative going forward? He says so, but time will tell if the Tatis who appeared on Tuesday has become the man the Padres had always hoped he would.

Words are great, actions are better and Tatis needs to shine with both to restore his reputation.