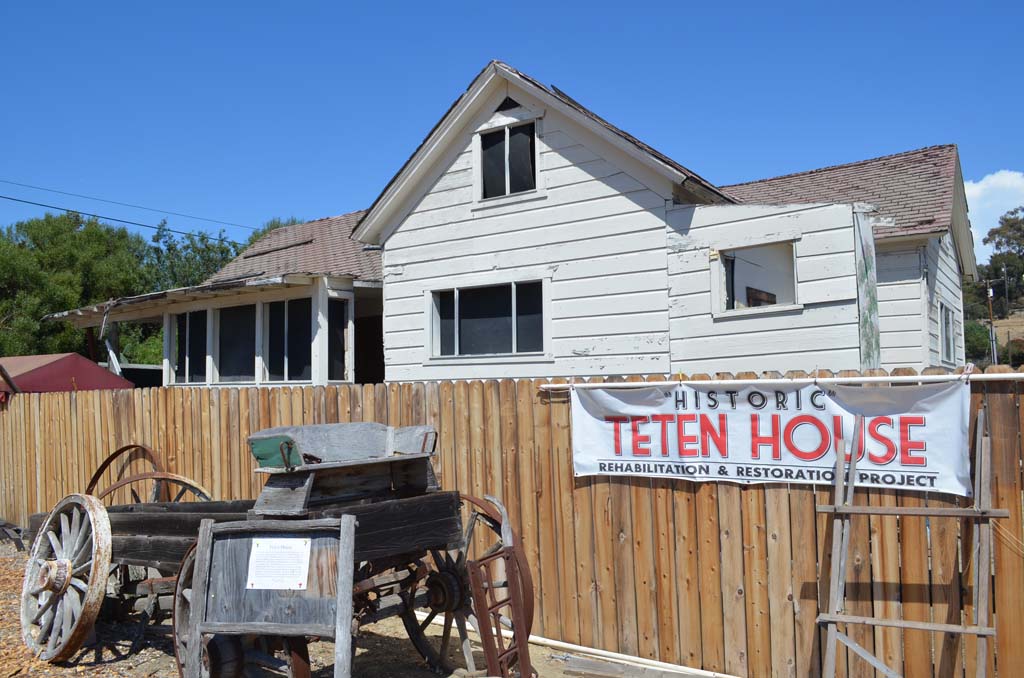 Built in 1885, the historic Teten House will be placed on concrete foundation as part of a San Dieguito Heritage Museum revamp. The Planning Commission backed the museum’s master plan for expansion, paving the way for new exhibits. Photo by Jared Whitlock

ENCINITAS — From a re-creation of downtown in the late 1940s to a 4,000-square-foot barn, the San Dieguito Heritage Museum is looking to add more exhibits.

The Encinitas Planning Commission backed the museum’s master plan for expansion with a 5-0 vote on Sept. 5.

Founded in 1988, the museum spotlights history from Del Mar to Encinitas. Inside the museum, there are old photographs and artifacts like wooden surfboards. Outside, visitors can peruse exhibits ranging from an old-time stagecoach to a 1950s fire truck.

The planned exhibits, combined with ones already there, will give a full picture of the area’s history, said Will Neblett, executive director of the museum.

“They can walk through history,” Neblett said.

Presently, a Native American grass hut stands at the northeast corner of the 1-acre property as a nod to the first settlers of the area. Strolling in a semi-circle along the property, there’s an Olivenhain home from 1885, a 19th century general store, a historic Texaco gas station and a 1930s shack built in the early days of Ecke Ranch.

To continue the trip through time, Neblett said the museum directors would like to reimagine downtown as it was nearly 70 years ago with a new exhibit.

“Surf culture was starting to spring up and the 101 was being built,” Neblett said. “We would like to have storefronts and other structures that reflect that time.”

As another link to the past, the plan calls for constructing an adobe brick structure. Also being built: a 4,000-square-foot barn that will contain old documents for researchers to leaf through. And the barn will double as a spot for public meetings.

“Encinitas has a shortage of meeting places,” Neblett said. “I think more people will come here for meetings and want to see the rest of the museum.”

Additionally, the 1885 home, known as the historic Teten House, will be placed on concrete foundation.

Neblett said the master plan came about in response to more people checking out the museum. For instance, more than 1,000 local elementary school students visited this past school year, compared with 350 students three years ago.

Also, the museum is due to get more visitors thanks to more people gravitating to the surrounding area, Neblett said. He noted the nearby Leichtag Foundation property will soon host more community programs. Plus, the school farm across the street is sprouting.

“We’re in the middle of a new community hub,” he said.

Previously, the museum could be found below City Hall. In 2007, it relocated to 450 Quail Gardens Dr. — property that the city owns. In exchange for educating residents about local history, the city leases the property to the museum for $1 a year.

At the planning commission meeting, Planning Commissioner Anthony Brandenburg called the expansion “fantastic,” adding that the museum has long been a valuable resource for those in the community.

A handful of museum supporters spoke in favor of the master plan during the meeting.

Currently, Neblett said there’s no timeline for construction. The museum is still raising money for the master plan, and it’s currently unknown how much money is needed to fund it.

To move forward with construction, the museum must pave 41 concrete spaces in the nearby dirt lot and implement drainage improvements, as per city requirements.

Resident Donna Westbrook opposed the expansion plan. Westbrook said the city’s General Plan demands a 50-foot buffer from any riparian wetland for developments, but the museum’s master plan only calls for a 5- to 10-foot buffer.

But Roy Sapau, senior planner, said city code allows for a reduced buffer if a development provides “protective measures for the wetland.” Art classes return to Poinsettia Elementary for another year

Oceanside to add 11 firefighters thanks to a $2.7M grant