But not to worry, would-be online gamblers and folks who want to lay wagers in Indian casinos or racetracks: Sports gambling will be back on the ballot soon.

The untold billions of dollars that promised to flow from either this fall’s Proposition 26 or 27 — or both — were the reason Native American gaming tribes and the big national online sports bookmakers put up a record war chest of more than $440 million to pass these propositions.

The same billions assure the idea will be back as often as it takes for something akin to 26 or 27 to pass.

Maybe next time, the campaigns will be more honest. For while lies are common in this state’s initiative politics, rarely if ever have they been as obvious and obnoxious as those propounded by gaming interests this fall.

One remarkable pre-election poll showed voters didn’t take long to recognize this: While both propositions ran about even among voters who saw no more than one or two of the ads backing Propositions 26 and 27, those who saw a lot of ads were against the propositions by margins of almost 2-1.

The ads were not merely ineffective; they were self-defeating.

Dishonesty began with the formal title of Prop. 27: the “California Solutions to Homelessness and Mental Health Support Act.” That title didn’t even mention gambling.

In fact, had Prop. 27 won, gambling revenues would have been taxed at slightly more than 10%. Of that money, 85% would have gone to homeless support agencies that already get billions in state tax money.

So it would have made little difference in a field where big money has proved ineffective.

Meanwhile, commercials for Prop. 26 were also dishonest, implying that much of its take would go to mental health treatment of pretty much the same unhoused populace that Prop. 27 claimed to help.

In reality, neither measure was giving away much of the proceeds.

That may have been one reason the falsely promoted Propositions 26 and 27 lost among both Republicans and Democrats, Donald Trump supporters and Trump haters.

This entire outcome was as counterintuitive as it gets. Early on, if you were a gambling man or woman, you would have felt foolish betting against either initiative.

For the recent history of propositions aiming to legalize things that long were considered illegal vices suggested one or both would pass easily.

That’s what happened first with medical marijuana and then with recreational pot.

Now, because of initiative outcomes, it’s hard to find a city or county without at least one cannabis dispensary.

The same with gambling, where voters in 2000 approved Indian gambling on once-impoverished and desolate Native American reservations.

But as the tide turned against online sports gaming, backers vowed they are not finished, that they will bring legalized online sports betting to the ballot again. This would not be unusual.

Proposition 29, the third attempt in the last four years by the Service Employees International Union to unionize at least some of the labor force at dialysis clinics, failed badly again this month, but who’s to say the union won’t try again?

It was no surprise, then, when the CEOs of the FanDuel and DraftKings online sports bookies, announced at an October gambling convention in Las Vegas that they would “live to fight another day.”

First, though, they will have to work with Indian casinos to share the wealth so they don’t end up with another set of competing propositions, something that pollsters said hurt their chances this year.

They will also need to sweeten the pot when it comes to sharing the new wealth they could get from California with positive civic causes and with impoverished Native American tribes.

Giving these interests a minuscule share of the proceeds may have been another factor in the defeat of both Propositions 26 and 27.

So the gaming folks have work to do if they want to milk the billions they seek to take from Californians. 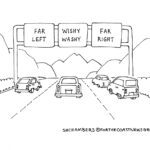