An English Bulldog stands on rocks at Dog Beach in Del Mar. A North County resident hopes to bring a similar area to Carlsbad. Courtesy photo

Still in its infancy, one resident is creating a grassroots effort to create a new dog beach in the city.

Currently, the closest area for dogs to roam the coastline is at Dog Beach in Del Mar. In Carlsbad, many residents let their dogs loose at Terramar, which is illegal and residents can be cited with minor fines.

But Dan Pearlman, 58, started a petition on MoveOn.org several weeks ago and it has received traction thanks to social media and dog lovers. As of July 2, 897 people had signed.

An owner of two dogs, he said it would be a benefit to the city, residents and, of course, dogs.

“I’m a dog lover and we really love taking our dogs to the beach,” Pearlman said. “The problem is the closest area is in Del Mar.”

Of course, one hurdle is the location, which Pearlman said he is open for discussion about. The city only owns one mile of the seven along the coastline. The State of California owns the other six miles.

Multiple messages were left with Carlsbad Parks and Recreation Director Chris Hazeltine, but were not returned.

Pearlman said allowing dogs would help with keeping the area clean, as “responsible” dog owners will clean up after their animals, thus putting pressure on others who do not. For example, the dog beach would give dog owners an area on the beach to take their dogs, thus reducing or eliminating the amount of waste left in other beach locations.

Pearlman also contacted Councilwoman Cori Schumacher about the next steps and was suggested to contact the City Council and city staff through letters.

With dogs comes management and waste, which Pearlman said he is open to solutions.

“There is a solution for almost any problem,” he added. “I think we can do it. I think it’s just going to take some work and some planning. And that’s what I intend to do.”

Moving forward, he said he wants to start engaging residents through meetings and gathering 10,000 signatures on the petition, and also submitting letters in support.

Additionally, Pearlman said he wants to also engage with the state about possible locations and clearing regulatory hurdles.

“We don’t have an area in mind,” he said. “What I would like is an area where not so many tourists frequent and not so many residents use a lot. We still need to analyze that.” 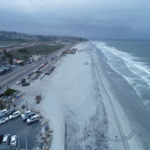 Carlsbad residents love dogs. This can happen easily for our community. If it works so well in Del Mar why wouldn’t work here too?

The two existing parks are busy ( and one is very small ). Another unofficial one trying to get status is CVD and Victoria ( more of a Dog Trail … a great idea being a trail – meet many friendly people and pets there.

Please …. a dog beach …. much need and will be most appreciated. Nothing like a swim for you and your best friend.

Dan Perlman here…
I authored this petition and would love it if you’d sign and share with your friends.

Thank you for your support!

There are already two dog parks in Carlsbad, one on CVD/Elm east of ECR, plus dogs can be taken all over Hosp Grove, near the mall. There is a large park in Encinitas accessible via the Encinitas Blvd exit from I-5 that allows dogs. There are a couple of other dog parks further south that my friend used to take her dog to. And of course, the dog beach in Del Mar.

This proposal has had a lot of discussion on http://www.Nextdoor.com in northern C’bad/southern O’side. Many people mention that current dog parks are not cleaned up after use by all dog owners. That is unsanitary. Until dog owners constantly keep clean the areas already allocated for dogs, I can see why folks don’t want to share a limited resource like the beach with dogs.

It is already difficult to go anywhere in public without encountering dogs, whether it is the grocery store or a restaurant or even the mall. Dogs pretty well go everywhere their owners go these days. So I don’t think it is unreasonable to have one public outdoor space that is dog free.

I would love this! As most North County dog owners have no place to go!