A rendering of the Inns at Buena Vista Creek, a hotel project land owned by both the cities of Carlsbad and Oceanside. Rendering by AO Architects

CARLSBAD — The fate of three proposed hotels in Oceanside was sealed after the Carlsbad City Council voted to approve the project during its Oct. 19 meeting thanks to a quirky split of land near state Route 78 and Jefferson Street.

The council approved changing the land use designation from commercial to open space and permits for the developer, Jenna Development, to construct the Inns at Buena Vista Creek, which consists of three hotels with 426 rooms, a four-story parking garage with 432 spaces and a three-lane, clear-span bridge crossing the creek over to The Shoppes at Carlsbad, according to Carlsbad Senior Planner Jason Goff.

The Oceanside City Council approved the item on July 27, 2020, and is awaiting the California Coastal Commission approval to advance a Local Coastal Program (LCP) amendment, although the commission will consider a consolidated LCP for development occurring in both cities, according to Sarah Lemons, a spokeswoman for Carlsbad.

“We believe we have produced a project that meets all the requirements,” said Barry Sedlik, who represented the developer. “We will have a sustainable hotel operation once underway. The site will actually improve and mitigate flooding to adjacent property owners.”

The proposal calls for restoring the creek, which has become overrun with cattails and other vegetation, while the site has become a dumping ground with trash and shopping carts littering the landscape.

“I think it’s an eyesore and (we) have turned our back on it,” Councilman Peder Norby said of the creek. “I’m excited about … the creek being a point of pride.”

As for the hotels, they will consist of a Hampton Inn, Homewood Suites and Embassy Suites, Sedlik said. They will range from 50 to 75 feet in height.

Sedlik said the plans also call for setbacks of 100 feet, rather than the 25 required, and will maximize the open space, along with flood mitigation and including native plants.

Carlsbad will be responsible for continued maintenance of the creek once the restoration is complete, along with providing water and wastewater services to the hotel, Goff said.

The project will also realign an existing sewer and storm drain line and improve a storm drain outlet in Buena Vista Creek.

The bridge will provide access from The Shoppes at Carlsbad along with an entry point off Jefferson Street. Additionally, an emergency access road is proposed along with a pedestrian trail.

“I see these two projects working in conjunction together,” Mayor Matt Hall added. “Over the years, I’ve tried to figure out how to enhance the creek and the possibilities.” 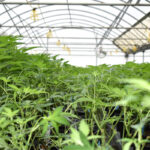 For Oceanside cannabis, slow and steady wins the race