The amazing Pasta Tahdig that was a part of my birthday week eating. Photo by David Boylan

Having my birthday fall on Memorial Day weekend this year and having the opportunity to split the week prior to it between Michigan and Encinitas, it got me reflecting on all that is good in my world … with an emphasis on the culinary side of things.

It started with my return to Michigan and the Empire Asparagus Festival that is held the weekend before Memorial Day every year. If you are not familiar, Empire is one of those small town gems on Lake Michigan and the gateway to Sleeping Bear Dunes National Lakeshore. It is truly one of the most beautiful parts of the country, if not the world. I was back as a judge for the asparagus recipe contest and to run in the Kick your Ass-paragus 5k and partake in the festivities of course. Friday night started with a fish boil that was made up of Lake Michigan whitefish, potatoes, carrots and cabbage and was delicious. The 5k was Saturday morning and the first half mile was almost straight up which made for a challenging yet satisfying run. I should admit that I had maybe one asparagus beer too many from Right Brain Brewing out of Traverse City the night before but I pulled it together, and the light mist and 50 degree weather was perfect. The asparagus contest followed and I was impressed by the entries this year. Saturday night was the highlight with the dance inducing zydeco sounds of the Benzie Playboys filling the dance floor all night.

The balance of my Michigan trip was filled with great Lick the Plate radio interviews in both Traverse City and Detroit. A dinner/interview at the home of a Burnett Foods executive on the Old Mission Peninsula was spectacular, followed by a Peruvian meal and interview in Detroit. The diversity of those few days made me feel grateful to have Lick the Plate in such diverse markets as San Diego, Detroit and Northern Michigan.

I was back in Encinitas in time for the holiday weekend and my birthday on Saturday. It coincided with the 50th anniversary of the Pannikin in Leucadia, one of my favorite places anywhere. If you do a Google search for “Lick the Plate Pannikin” you will have a better understanding of my relationship with this special place.  I stopped in for my birthday chicken and artichoke quiche and ran into a few local artists and musicians who were part of the anniversary celebration. Sitting there savoring my favorite quiche, soaking in the tunes and the eclectic mix of folks that pass through this joint, it made me grateful to have this iconic establishment in such close proximity to my home.

Saturday night began by popping into a jam-packed Captain Keno’s with a friend who had never experienced the Keno magic.  It was special night with Prime Rib for $12, Crab Legs for $22, and a half rack of ribs for $10 and full rack for $15, so the place was hopping. We scored a couple prime seats at the bar and had a conversation with the owner who is a Michigan native. I’ve told this story in a past Lick the Plate column that you can find online by searching “Lick the Plate Captain Keno’s.”  This place is a throwback in the best possible way and I am grateful to have it as a local escape when I need a respite from the trendiness that tends to dominate my Lick the Plate adventures.

Next up was sunset at Stone Steps and, well, this is an obvious one to be grateful for. I’ve been surfing and running this spot for years and while I’ve never really cracked the inner circle of the local locals who gather for sunset and surf it regularly, I do get the occasional nod or grunt in my direction and hey, I’ll take that.

Our quest on foot continued into Encinitas and the American Legion Post 416. There was an 80’s cover band playing so we popped in, ordered a cocktail and joined the folks on the dance floor shaking it around to “Walk Like an Egyptian” and “Don’t Stop Believin’.” I am so grateful for the Legion both as a member and a son of a Marine who fought on Guadalcanal in World War II and as a lover of diversity and never knowing what I am going to pop in on any given night. And from what I’ve heard the Taco Tuesday open jam night is packing them in.

My final note of gratitude is for the culinary resource that is The New York Times. Besides keeping up on NYC culinary trends, it is a resource for recipes that I’ve been devouring for years. The great thing about it is that there is always a well-written back-story to go with the recipe that provides a connection to the dish that can’t be conveyed by a recipe alone. I wrapped up my weekend by having friends over for a fairly traditional Memorial Day dinner of grilled brats, Italian sausage, burgers, asparagus and Pasta Tahdig as our starch. I’d never heard of it until that morning reading the Sunday New York Times Magazine, where Samin Nosrat romanced the heck out of this dish. Well it worked on me and the great thing is, it’s such an easy dish to make…assuming you are able to flip it. Anyway, I have advice on that so feel free to contact me directly.

So that’s it, another year and a whole lot to be grateful for. To another year of Lick the Plate and everything good that goes along with it. Taste of Wine: The Prisoner — a wine of elegance & balance — sets record at Seasalt 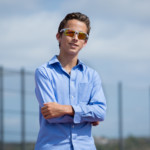