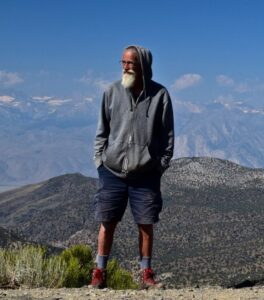 Richard H. Reeves died peacefully in his sleep, August 3rd. Richie is survived by his loving family: his son, Thomas Reeves, his daughter, Rachael Reeves, her husband Sean McCloskey, their son, Declan McCloskey, and Richie’s best friend and former wife, Marylou Wellbrock-Reeves. One of Richie’s greatest joys was the birth of his first grandchild this past year, Declan McCloskey.

For those who knew Richie, he was an artist at heart. His work can be seen and enjoyed by all of us in the gardens he tended at our homes in Lewes.

Richie was an accomplished baker who would spend hours working on his tasty creations for all to enjoy, most recently over this past weekend.

A gentle soul with a keen, intelligent, inquisitive mind, Richie loved animals of all kinds. He now joins his dogs, Skinner and Buddy, for perpetual walks in heaven.

Having built a home in Lewes, Delaware in 2001, Richie moved to Lewes full time in 2012 after his retirement from his dental lab, Goldmasters, Inc.1949

Richard Harold Reeves was born in La Habra, California in 1949. One of four boys born to Rex and Virginia Reeves, Richie is survived by two brothers, Steve and Dave, having been predeceased by Donald.

One of Richie’s greatest achievements was, at the age of 45, how he conquered complete paralysis from his upper chest to his feet caused by a condition called transverse myelitis. Not being able to move so much as his little toe, Richie spent months in rehabilitation first simply surviving the attack, and then working hard and willing himself to walk, defying all odds with his success. For the rest of his life, Richie hid his physical limitations with his most idiosyncratic and humorous way.

Funeral arrangements are under the direction of the Parsell Funeral Home. Friends and family can leave condolences at https://www.parsellfuneralhomes.com

Although plans have not been finalized, there will be an outdoor memorial service in Lewes, Delaware to be held in one of the garden’s Richie so patiently tended which will be livestreamed with a post-COVID memorial service in California at a later date. In lieu of flowers, contributions can be made in Richie’s honor to the Greater Lewes Foundation, PO Box 110, 135 Second Street, Lewes, Delaware, 19958.