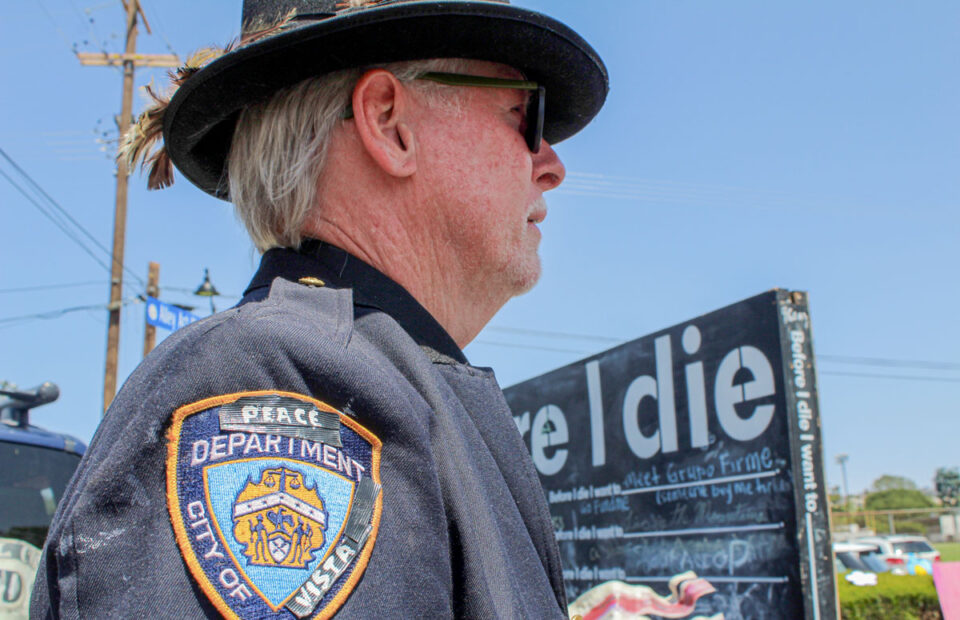 Vista artist Stephen Frank Gary, whose work is on display at the Backfence Society gallery through Saturday, repurposed an old law enforcement coat to promote his peace message. Photo by Jacqueline Covey

VISTA — The Backfence Society is granting wishes, at least for some artists.

The nonprofit is dedicated to community engagement through art by offering programs and granting weeks-long residencies to regional artists — a majority of whom are from Vista.

“If I could do any show, you’re looking at it,” said Stephen Frank Gary, the gallery’s featured artist for April, arms open looking at his works displayed at the gallery at 110 S. Citrus Ave.

Gary’s exhibit, titled, “Artistlooseination Hippieshit; Make a Better World. Peace is an Action Verb,” remains on display at the Backfence Society gallery through Saturday. It is a mixed-material dedication to peace and the First Amendment.

While peace is a lifelong obsession to the self-proclaimed hippie, fighting censorship has taken an increasingly large role in his art.

Using digital art on canvas, wood, paint, or metals — or a combination — Gary forces the viewer into an uncomfortable position, his position.

One of his works, for example, features newscasters on national outlets. However, the male caster is a bulbous, yellow caricature sitting beside his female anchor, who has purposefully enlarged breasts — his nod to yellow journalism, a form of writing that sensationalizes facts.

“This show is about censorship and censorship in the media,” Gary said, calling out those who follow skewed reporting. “The media does not promote anti-war stuff.”

Some may remember a long-ago newscast reporting the defacement of the Hollywood sign with a peace sign. Now, decades later, the former attorney can admit it was him. However, Gary said that the true story was missed and fabricated.

The pressure and hurdles of censorship in galleries and in the media are frustrating, Gary said.

Since becoming a working artist, Gary has collected several instances of feeling misunderstood or overlooked in the art world. Gary said he has memories of his work even being removed from displays.

“The media should be helping people like me,” Gary said, adding that his work reflects the money-poisoned media industry. “It’s silencing voices like mine, the anti-war groups. There are some deep things we need to talk about.”

One of those issues he discusses is the impact of war on civilians.

In one piece, titled “16 seconds after the bombing of Hiroshima (wait),” Gary calls on viewers to consider disarmament, policy protection against nuclear warfare.

“We’ve been waiting for too long, and I am here to talk about it,” Gary said.

Gary’s pieces are meant to move and transform the longer a viewer sits at a piece, new discoveries popping up with each new look.

And other galleries stifle his passion, he said.

The Backfence Society “allowed me to do whatever I wanted,” said Gary, who used that creative freedom to hang installations and write titles on the walls. “I don’t feel filtered. How about the walls? Where else do you find that?”

You find it at Backfence, a place endearingly on a mission to “Make Vista weird,” according to President Natalie Vaga.

The gallery encourages artists to explore their unique points of view and push forward conversations in their community.

After graduating from the University of Texas with a fine arts degree, Gary headed to the coast — a place he’s always loved. Since 1969, the surf-loving artist ripped through the beaches of San Diego County but settled in Vista.

From 1999 to 2016, he was a lawyer in Oceanside. He said that he never received any complaints nor was any disciplinary action taken against him during his active years as a worker’s compensation and personal injury lawyer.

However, he was eventually disbarred for not paying his bar dues, Gary said.

The California Bar Association “just wanted more money,” he wrote in an email to The Coast News. “So adios, amigos.”

Then, Gary dove headfirst into his art.

Gary is a local eccentric — donning a homemade “peace” officer badge upcycled from an old law enforcement overcoat. Some may have seen his calls for freedom around the world. With works such as a multi-feet peace wheel and other peace sign sculptures, Gary has made a stand for peace in Washington, Paris and other major cities.

In Vista, the Backfence Society gave him the keys to stay local and be free in his work — like it does with all of its resident artists. The Artist Occupancy Program is a rotating exhibit featuring local artists in the Clubhouse Gallery.

Running anywhere from a few weeks to three months, artists spend at least 15 hours a week at the gallery exhibit, with minimum curation from the gallery.

Backfence has been supporting collaborative arts since 2011. However, the group didn’t move to its Citrus Avenue location until 2017, when it continued fostering creative lessons and collaborations. The residency program started in January 2021 by president and founder Sarah Spinks and artists Christina Curiel and Joseph Curiel.

“It’s a safe space for artists to come,” said Spinks, who now sits on the board of her art collaborative 501 3(c).

Spinks met Vaga several years ago through the Alley Art Festival, which is a gathering of musicians, writers and artists in the area. Since then, the two, along with the rest of the Backfence team, have worked to bring together creatives to foster limitless creation.

“We try to be there for all artists,” Vaga said. “All artists have their own rainbow. Sarah has been able to create a place of creative expression for everyone to have a rainbow to shine under.”

This year the Art Alley Festival will be held in partnership with the Vista Art Foundation at the Green Oak Ranch on June 11.