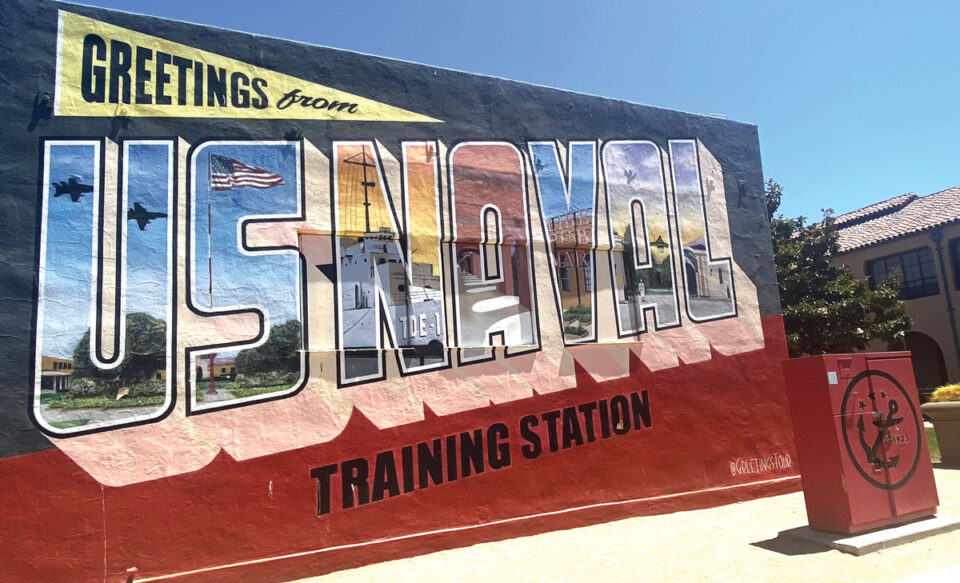 The goal: To travel to and explore San Diego’s Liberty Station and do it without a car.

Unfamiliar with Liberty Station? It is the former Naval Training Center, commonly known as NTC. Between 1923 and 1997, more than 2 million naval recruits passed through its gates.

The base’s impact on history and San Diego can’t be ignored. It trained naval personnel during World War II, the Korean War and Vietnam War. Peak population of NTC registered in the early 1950s at 40,000, and during the 1990s, the base contributed almost $100 million to San Diego’s annual economy.

The former NTC sat on 600 acres of prime real estate — the north shore of San Diego Harbor and bordering a small channel that juts north from the harbor.

After the base closed in 1997 and was returned to San Diego, the city entertained bids and ideas for development.

Work began in the early 2000s, and all but 10 of the 300 buildings have been restored and repurposed, their architectural details and the green spaces meticulously preserved as they were when thousands of recruits called it home.

Picture an 18-year-old recruit from Billings, Montana, away from home for the first time, getting his first look at the base’s Mission Revival campus, seeing the palm trees and harbor view, and feeling the ocean breeze. Undoubtedly, he must have thought he’d arrived in paradise.

Then and now, the property was/is easily accessible via public transportation, so my faithful friend Wanda (always agreeable to come-alongs) and I board the 9:43 a.m. southbound Coaster from Carlsbad Village Station.

We arrive 50 minutes later at the Old Town Transit Center and walk the final 1.7 miles to a Liberty Station entrance on Rosecrans Street. You can avoid walking by catching the 10:41 a.m. No. 28 MTS bus for a 10-minute ride.

We meet Laurie Albrecht, director of the Liberty Station Community Association, under a vintage Liberty Station sign, and begin our history walk throughout the 360 acres. (The other 300 acres is now NTC Park, a vast expanse of waterside green where visitors can picnic, hike, bike, play sports, paddleboard and kayak.)

Our first stop, appropriately, is Building 1, the former mess hall and commissary, built in 1922.  NTC’s buildings were numbered in order of construction.

“As the former NTC was being redeveloped, many of the original buildings were transformed into the same type of usage,” Albrecht says. “A few examples: This mess hall became Liberty Public Market, the Luce Auditorium became The LOT (luxury cinema and dining), High Tech High were education buildings and the PX (base exchange) buildings are slated to become two live theater performance centers.”

Other buildings have found their own path.

Building 177, once the library, is an events space, a Dirty Birds restaurant now occupies the old base telephone exchange and the former brig (jail) is designated as storage.

The North Promenade, once filled with marching recruits and bordered on each side by old barracks, has become Liberty Station’s Arts District. Numerous outdoor artworks by local artists dot the landscape throughout, and each building has a historic marker (sometimes hidden, so look behind the shrubbery).

Heeding Albrecht’s advice to wear good walking shoes is paying off. She keeps a respectable pace as we cruise around the campus, walking through the arched colonnades that give the architecture that distinct Mission Revival look.

“You can see here,” she points to a place where layers of paint have been exposed, “how different colors of paint were used through the years.”

We cap off the day with an hour of kayaking with West Coast Paddle Sports, paddling around the channel. It feels good to sit after walking five miles (according to my phone). A few airplanes leave nearby San Diego International Airport, and then all is quiet.

It’s mesmerizing watching the breeze ripple the water and the bobbing seagulls. And then it’s time to walk that last half-mile to the bus stop. The No. 28 bus delivers us at Old Town, a few minutes before the 5:47 p.m. northbound Coaster pulls in.

Take a walking tour of Liberty Station using your cellphone. Learn about the many art installations throughout the campus by enabling the QR codes on each sign with your phone. For more photos, visit www.facebook.com/elouise.ondash. Gardening with a passion For Conlans, humor is par for the course