This rendition submitted by the City of Vista shows the buildout of a roundabout, curb extension, transition striping, and other conceptual improvements proposed for Emerald Drive between Jonathan Place and Thomas Street. Courtesy rendering

VISTA — The Emerald Drive corridor is getting its third try at a multimillion-dollar grant to slow cut-through traffic and protect pedestrians and bicyclists.

A workshop was held in the Vista council chambers on Wednesday, May 25, ahead of a June 15 application deadline for an Active Transportation Program grant administered through the California Transportation Commission (CTC) to enhance traffic flow on Emerald Drive.

If granted, the construction project would add six roundabouts, bike lanes and expanded curbs on the Vista side of Emerald Drive between Date Street and Olive Avenue. The project would cost an estimated $6 million.

The City of Vista is asking the state transportation commission for about $4.8 million — with the city’s matching $1.2 million tacked on — to make the total $6 million to rehabilitate the street.

With both Oceanside and Vista residents in attendance, the tone was generally positive toward the roadway changes presented at the community workshop. The 20 attendees were hopeful the plan will slow traffic on a road where, they say, drivers are consistently speeding.

Emerald Drive is the main vein for neighborhood homes in both Vista and Oceanside. The roadway is also a route for Tri-City Christian School, Bella Mente Montessori Academy, both located on Emerald Drive, and nearby Grapevine and Casita elementary schools.

Currently, the shared space for pedestrians, drivers and bikers is tight on the Vista side. There is a point at Jonathan Street that forces pedestrians close to traffic due to a protuberance in the road. There are places where there is no sidewalk at all.

“It doesn’t feel completely safe to walk on the Vista side right now,” said Kurt Haider, an Oceanside resident. “For some people, it’s scary.”

Haider is confident that the road will keep up with development, as both cities continue to grow.

“I like it,” he said. “I hope that the increase in bike lanes will help decrease the car traffic. (The proposed plan) is better than it is now.”

In the last five years, there have been 61 accidents in the proposed project area on Emerald Drive — one of them fatal.

That number “is really a lot for a segment of street like that,” said the city’s Principal Engineer, Sam Hasenin, who led the May 25 workshop.

“It’s really almost impossible in certain times of the day to make a turn out of those side streets. I’ve tried it myself,” Hasenin said. “It’s just not possible.”

In 2018, Hasenin led two community workshops and worked with a consultant on the best methods to reconstruct the area. At that time, the city was not chosen by the CTC for the Active Transportation Program grant.

So, in 2020, Hasenin submitted the proposal again — with some tweaks.

“Unfortunately, we were not successful,” Hasenin said. “We were really close.”

So the team went back and reworked the application project one more time.

“We are optimistic that we should be able to get that funding,” Hasenin said. 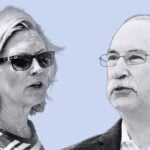 Compared to signals, modern roundabouts are:
– Proven safer
– Have less daily delay = less pollution
– Typically, the least-cost solution over the life cycle of an intersection