CARLSBAD — Prince may be gone, but purple has been raining down on the gridiron this season.

The No. 1-ranked Carlsbad High School football team rolled to its second consecutive undefeated regular season setting itself up for the CIF San Diego Section Open Division playoffs, which kicks off against No. 4 Torrey Pines at 7 p.m. on Nov. 12 at Swede Football Stadium in Carlsbad.

With a breakneck offense and ferocious defense, Carlsbad (10-0) is averaging 38.3 points per game, allowing just 13.5 points from its opponents. The Lancers went 6-0 to win the Avocado League, their second straight league title.

The Lancers’ win streak is at 15 games, dating back to last spring where they went 5-0 in a shortened season due to the pandemic.

Now, the senior-laden team is trying to win the Open Division championship, which would be its seventh overall CIF title in school history.

“We have a really good group of seniors that played a ton last season,” CHS coach Thadd McNeal said. “We don’t just have one star, we have probably six or seven that make big contributions. They play well together and are easy to coach.”

The Lancers blitzed their way through opponents, beating all but two teams by double digits, Mission Hills (13-7) and Torrey Pines (34-33), the latter of which the Lancers defeated after scoring a last-second touchdown pass in what many believe was the game of the year.

Now, the two longtime rivals strap up for a rematch led by Carlsbad High’s sophomore quarterback Julian Sayin, who follows in the footsteps of his brother, Aidan, who is now a quarterback at Penn.

Julian Sayin has put up impressive numbers this season, completing 70.8% of his passes for 2,322 yards, 30 TDs and just five interceptions.

“We had a lot of momentum from last season and have reciprocated that success this year,” Burak said. “We have a great coach in coach Mac and a great, young quarterback in Julian Sayin, which takes the pressure off the run game.”

McNeal said the injury bug hit the team early this season after Burak suffered an ankle injury. Others missed playing time due to COVID protocols. Regardless, the Lancers didn’t miss a beat as they filled those temporary gaps.

The Lancers’ stalwart defense is led by Ferrelli (59 tackles) and Barrett Brennan (52 tackles).

Brennan, who also plays tight end, said the key on defense has been its speed, along with the defensive line holding blocks to allow the linebackers and safeties the ability to penetrate. Also, the senior linebacker noted the camaraderie within the Lancers has been a contributing factor.

“Really, it starts up front where we have guys who are really selfless and let us make plays,” Brennan said. “We built up all this chemistry and it’s built-up better and better as the games have passed.”

Torrey Pines is led by quarterback Remi Baere, who’s thrown for 1,365 yards, 15 TDs and four interceptions. On the ground, the Falcons have a contingent of backs racking up carries with Alexander Taylor leading the charge with 695 yards and 12 TDs.

Also contributing are Dylan Friedland (457 yards, three TDs) and Easton Clements (368 yards and four TDs). Baere’s favorite targets are Ryan Flather who has 26 receptions, 497 yards and three TDs, and Wyatt Gardner, who has 14 catches for 460 yards and eight scores. 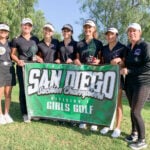