At California State University, San Marcos, a 400-level geography class, “Parks and Protected Areas,” is working with the city of San Marcos to create a communitywide survey that will measure the Parks and Recreation Department’s current areas of success and limitations. Screenshot via Google

SAN MARCOS — Who visits the parks in San Marcos? How far do people travel to attend an event? How do people learn about the events? These are a few of the questions students from California State University San Marcos might be asking during an upcoming survey as part of the next “Democracy in Action” project.

Each semester a class from Cal State San Marcos teams up with the city of San Marcos to address an important issue.  The collaborations have been happening since 2017.

This semester a 400-level geography class, “Parks and Protected Areas,” is working with the city of San Marcos to create a communitywide survey that will measure the Parks and Recreation Department’s current areas of success and limitations.

Overall, the goal is for students to learn about civic engagement, local government and geography while administering a citywide survey.

“In the geography class, we are going to give them a glimpse into … this is a career that you may interested in,” Assistant Professor of Geography Elizabeth Ridder said. “Also, this is a geography class, so we are going to be mapping where we get respondents. The survey is completely anonymous, but where we have collected responses and how far people say they have traveled to use these facilities.”

The parameters of the survey have yet to be determined but it will be quantitative and qualitative. Forty students in the class will be broken up into groups of four and will be administering the surveys in pairs.

Ridder estimated the surveys will be in person and administered throughout the month of February. Students will have tablets and can record the answers immediately, then sync all of the data continuously. “This also gives us the power to provide the city with a link, so the surveys are web-based,” Ridders said. “The city can pass the link out. When people wish to take the survey, their responses are automatically included in our database.”

San Marcos is known for its parks department, however, there are several unknowns that geography experts like Ridder would like to explore. Students are asking how far people are traveling to visit the parks, determining what demographic do the parks primarily serve and asking why people aren’t using the parks if they are so close.

“Most people in the city of San Marcos, and this is not normal, live within a 10- to 15-minute walk of a park,” Ridders said. “This gives us some potentially good information about the benefits and what people do with something that is relatively that easy to access.”

Last semester, students presented a project on how to beautify a neighborhood across Barham Drive from the university.  The idea for Democracy in Action originated out of the University of Oregon and Cal State San Marcos put its own twist on it.

This project will be done by the end of the semester. Students will present the results to City Council by mid-May. Overall, Ridder hopes the partnership between the students and the city will provide a lasting impact on the department’s success.

“It’s a product from our class this is actually going to be used,” she said. “The idea of civic engagement, that you do have a voice in your community … This will have a purpose, a use beyond our classroom.” 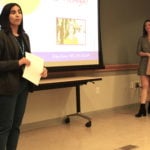 Stephanie Stang lives in San Elijo Hills, a community of San Marcos, CA and covers her city and surrounding areas.  She has 15 plus years of award-winning news experience, namely in television and earned her B.A. from DePauw University in Greencastle, IN where she started as a news director for WGRE-FM.  She’s interviewed or met every living president and first lady.  You can also find her working, working-out and volunteering at the YMCA of San Diego County in Encinitas. Contact her at stephaniestang@outlook.com