So…did you see the beer news? There has been a lot of it. Green Flash and Alpine Brewing was purchased by a cannabis conglomerate. According to San Diego Beer News, Rouleur Brewing is expanding again.

And, oh, by the way, Molson Coors is shutting down the Saint Archer brand entirely, and selling the brewery and tasting room facilities to Kings & Convicts Brewing Company.

Umm, what? Are these guys on some sort of Craigslist for breweries I don’t know about?

You probably know the (originally) Chicago-based Kings & Convicts name as they made a huge splash in San Diego when they purchased the iconic Ballast Point brand and brewing operations from Constellation Brands just a few years after they bought for a billion dollars. That isn’t a typo. Constellation Brands gave up on the brand less than half a decade after paying $1,000,000,000.

According to a joint press release from Molson Coors and Kings & Convicts, the Saint Archer brand will no longer be produced and Kings & Convicts will be moving all of their production operations to San Diego after originally planning a 50,0000 square foot brewery in Wisconsin and even breaking ground there in 2019.

“We are excited for the acquisition of the brewing facility and taprooms, as well as the talented production and taproom staff,” said Brendan Watters, co-owner and CEO of Kings & Convicts.

I reached out to Brendan via e-mail to follow up right after the announcement.

Cheers!: Congrats on the acquisition of the St. Archer property. Was a Kings & Convicts expansion in San Diego part of the plan or was this an opportunity that arose that was too good to pass up? Will the San Diego brewery take over the duties of your Midwest operations or be in conjunction with them?

Cheers!: How would you describe the theme, vibe, and ethos that Kings & Convicts will bring to San Diego and infuse into the new brewery?

Brendan: Storytelling, having fun with beer, rogueish, tongue in cheek. We take our beer seriously but we don’t take ourselves seriously.

Cheers!: Your Ballast Point takeover caused quite a stir in the San Diego beer community. What has the community response to the return of Ballast Point been, and considering we’ve been in a pandemic since that purchase, what challenges have you faced connecting with your new neighborhood?

Brendan: People have been positive about the brewery returning to San Diego but the pandemic has put a hold on a lot of our plans in the taprooms. We have sponsored local sports teams, engaged with the community as best we can but we are looking to get out of this pandemic.

Cheers!: If you were going to suggest ONE beer off the tap list to a visitor passing through, which beer would it be and why?

Brendan: Ballast Point’s Grunion [is a] great, easy-drinking Pale Ale, employees favorite beer and you won’t see it in stores.

Cheers!: Is there anything else we should know about Kings & Convicts or Ballast Point Brewing right now or you have planned for the future?

Brendan: We have some great new Kings & Convicts beers coming soon out of the new location here in San Diego.

Stream the classic episodes of the Roast! West Coast coffee podcast on the Coast News Podcast page, and be sure to follow Cheers! North County on Facebook, Twitter and Instagram. Got an interesting story about your drinking adventures? Reach out! I want to hear it. 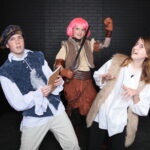