Save the Park has filed a second lawsuit against the Cardiff School District, National Park Service and

ENCINITAS — The local organization “Save the Park and Build the School” has sued Cardiff School District a second time, filing a lawsuit against not only the district but the National Park Service (NPS) and California Department of Parks and Recreation (DPR).

In March, the two parties settled the first lawsuit in which Save the Park alleged the District violated the California Environmental Quality Act (CEQA) by building on a small portion of George Berkich Park.

The district compensated Save the Park $500,000 worth of legal fees, resuming construction of Phase 1 classroom buildings and in June, upon receiving approval from NPS and the DPR, began Phase 2 construction.

The second lawsuit, filed on June 12 in the U.S. District Court for the Southern District of California, alleges when NPS and DPR approved the school district’s construction plans, they did so knowing the district was never in compliance with CEQA.

In a press release on June 15, the Cardiff School District expressed it’s “deep disappointment” with the second lawsuit stating, “while still evaluating the lawsuit and its options for responding, the district continues its commitment to the completion of the Project for the benefit of students and the greater community.”

The district hit back, claiming “when it became clear to [Save the Park] that DPR and NPS viewed the district’s plans as an enhancement to the outdoor recreation area and approval was imminent, the opponents took every extreme measure to stop the project.”

“DPR and NPS carefully reviewed all materials, including opposing documents provided by [Save the Park], and correctly concluded that the Project appropriately adjusts the boundary to the playfield/park areas in a manner that is a benefit to the District and its students as well as the public recreation users,” the district said in a release.

It is the NPS and DPR’s review process itself, which is the subject of Save the Park’s second lawsuit.

Eleanor Musick, a representative of Save the Park, spoke to the Coast News about the origin of this second lawsuit.

It began, when according to Musick, Save the Park read the analysis on the case written by NPS and DPR officials contradicted current CEQA rules.

“NPS and DPR are the agencies that made the defective decision,” Musick said. “They are the only ones that can be held accountable for violating the LWCF.”

“Our goal is to save the park. It’s to minimize the encroachment of the school construction into the park,” Musick said. “That’s all we ever asked them to do.”

The conversation surrounding the second lawsuit has reached local social media apps such as NextDoor, where posts on the topic have sparked heated debate.

Sarah Talbot, Cardiff resident and mother of a child attending Cardiff Elementary, has followed the rebuild and consequent lawsuits in the previous year.
“They’ve already settled. What more do you want,” Talbot said. “The decision was made and it went all the way to the National Park Service. This now seems like a waste of taxpayer money.”
Talbot expressed her worry over whether this second lawsuit will stop children from attending school this fall. “This is all so ill-timed with the pandemic. If this halts construction, will our children be able to attend school?”
A common accusation on social media forums, one which the District also highlights in its latest press release, is that Save the Park organizers “hid their true motives” of preserving their personal ocean views and property values.

“It has nothing to do with the views,” Musick said. “They’ve cut down all these trees during construction and if anything, my ocean view is huge compared to what it was before. When they tell people that it’s about our views, they’re just trying to stoke the flames of anger.”

“We are a nation of laws, yet we are bombarded daily with reports of public officials who consider themselves above the law,” Musick said. “It’s a matter of requiring a public agency who is responsible for handling taxpayer funds to be held accountable.”

Cardiff District reiterating its commitment to the community and cooperation with NPS and DPR, sharing the “agencies recognized the District’s continued commitment to preserving areas of the site for public recreation,” claiming a 23,000 net gain in square footage dedicated to public use.

In regards to whether the second lawsuit will prevent Cardiff Elementary students’ from returning to school this fall, the impact is unknown.

Musick insisted construction on classrooms and the lunchroom can move forward, “it’s the specific buildings they want to build in the park that is the target of the lawsuit,” while the District disagreed.

The district stated it would continue with plans, as the “the project is currently in a critical phase of construction,” however, “any stoppage or delay to construction due to this new lawsuit will preclude Cardiff School from opening for students for the 2020/2021 school year.”

For more information on the project and construction updates visit  www.cardiffschools.com/measuregg. Safety protocols in place, One Paseo retailers reopen their doors 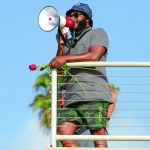 Turns out the lawsuit is preventing the kids from returning this Fall. Maybe this story should be updated, parents and kids are now completely at the mercy of these 4 neighbors. The kids have already missed so much school, and Musick and her accomplices have it in their power to stop this selfish litigation and let the school open. They chose to stop the construction of a needed walkway and entrance, knowing that this would keep 5 and 6 year olds off campus.

It’s interesting that Eleanor Musick and Save the Park complain about whether rules were followed. The non-profit isn’t even registered to do business in Encinitas, as required by Encinitas Code. The plaintiffs clearly believe rules are for others to follow, but don’t apply to them.