The proposition’s defeat means that Encinitas continues to be the only city in the county that does not have a state-compliant Housing Element in place. File photo

ENCINITAS — Encinitas’ controversial Housing Plan Update, Measure U, has been defeated. The unofficial election results reveal that 53 percent of voters said no to Measure U, while 47 percent said yes.

The proposition’s defeat means that Encinitas continues to be the only city in the county that does not have a state-compliant Housing Element in place.

It also puts Encinitas on uncertain legal footing. The city, which faces two lawsuits related to its lack of a certified housing plan, heads back to court on Nov. 13 for a hearing. On April 30, Vista Superior Court Judge Ronald Frazier gave the city the chance to secure approval via a vote of the people. Now that voters have weighed in against the plan, the ball is back in the judge’s court.

This is the second time that Encinitas has failed to get voters to pass a housing plan, with Measure T in 2016 losing 56 to 44 percent.

Mayor Catherine Blakespear, who has been re-elected, said, “I’m disappointed that we couldn’t figure this out locally. I think we’re better served making our own land-use decisions. But apparently it’s not possible to create a housing plan in Encinitas that satisfies the majority of residents and the state regulatory agencies. So now a court will decide.”

Three of five trustee seats for the San Dieguito Union High School District were up for grabs in this election. 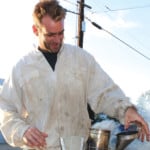 Local beekeeper raises awareness over ‘plight’ of the bumblebee