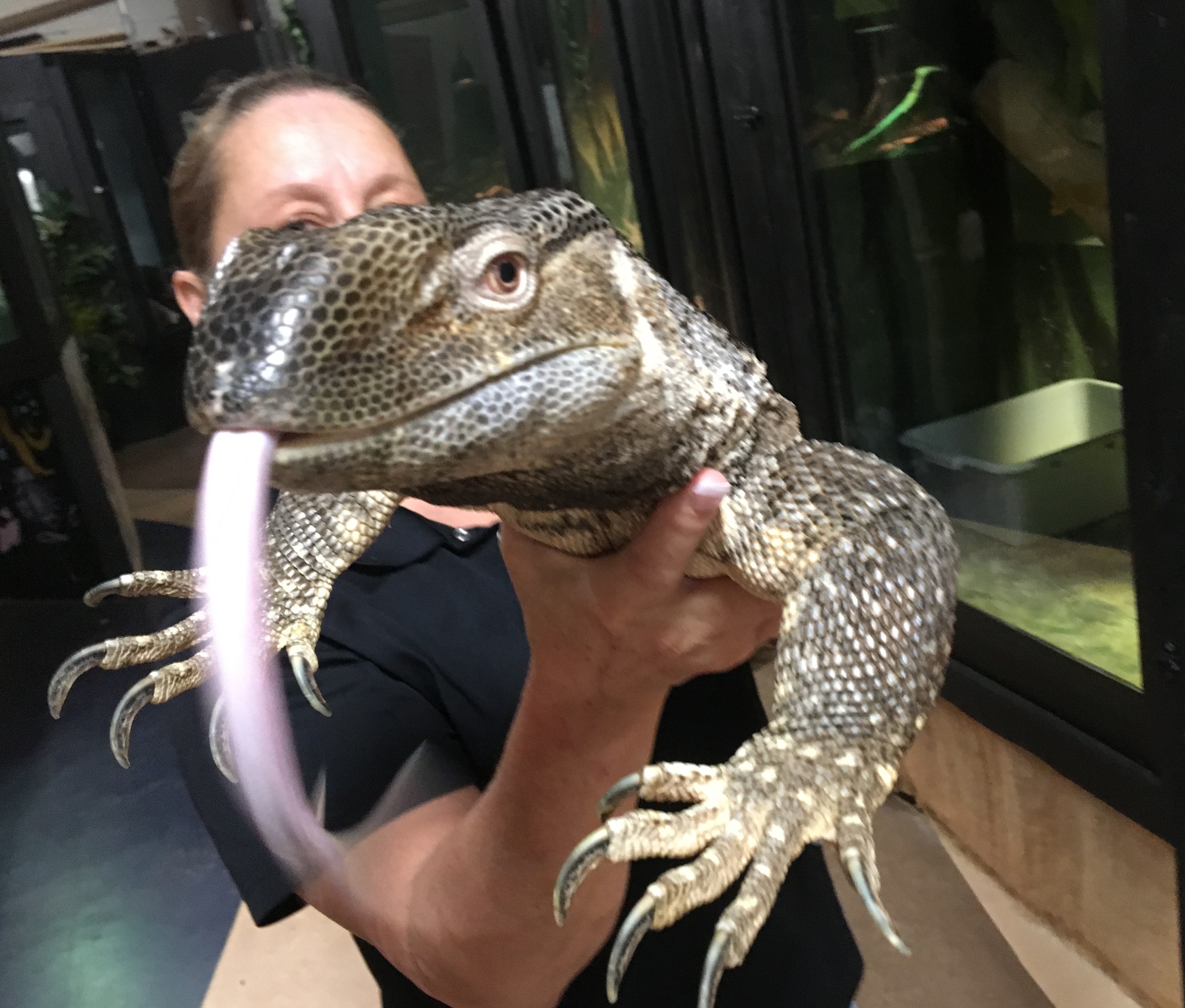 ESCONDIDO — It features a tortoise, a scorpion, snakes, iguanas, a chameleon, a turtle, a frog, a Nile monitor and more. But don’t be confused: the EcoVivarium is not a zoo.

Rather, EcoVivarium — located in the city’s downtown across the street from its long-standing Suzy Q’s Diner —  sits as a hands-on and educational museum alternative to the city’s more famous San Diego Zoo Safari Park. And the EcoVivarium’s founder and executive director, Susan Nowicke, said that she intends to keep it that way.

“Our mission is education,” Nowicke said during an interview and tour of the EcoVivarium given to The Coast News. “But we do that by rescuing reptiles, amphibians and arthropods and using them as a teaching vehicle.”

Nowicke said that 98 percent of the EcoVivarium’s animals are rescued and 2 percent are donated. None of the animals are purchased, other than a few bugs which have short life spans. The museum opened as a nonprofit in 2009 and all the way through 2016, upwards of 200 different animals lived in Nowicke’s house. Then in 2016, the EcoVivarium moved to its current location at 136 S. Juniper Street and so too did the animals from Nowicke’s home to this new address.

One of the truly unique features of the EcoVivarium experience is that the reptiles and amphibious animals, such as the frogs, have been trained in doses of hundreds — and in some cases thousands — of hours. This has allowed them to feel comfortable around and enjoy human companionship, much in the same way a pet dog or cat would, Nowicke explained and demonstrated with one of her turtles, a Nile monitor and other animals who live at the EcoVivarium.

Ultimately, Nowicke explained, a good handful of the animals which reside at the EcoVivarium are adopted with help from the San Diego Herpetological Society.

A fountain of knowledge about the behavioral characteristics of each of the different animals, Nowicke credited her knowledge and ability to train the animals back to a slew of mentors from around the world who trained her. She said that learning how to interact with the various reptiles, amphibians and anthropods is a constant learning process. And it is one in which she has trained herself as an autodidact, with a formal education in the field of business, not animal biology.

Since opening in the city’s downtown, the EcoVivarium has served as a hub for field trips and educational experiences for K-12 students throughout San Diego County, and even extending into Riverside County and Orange County, Nowicke explained. She emphasized that the EcoVivarium stands alone as both a hands-on experience, in which visitors can hold and interact with these types of animals, while also taking an education-centric approach.

One of the other major things Nowicke and her staff teach visitors is how the animals living at the EcoVivarum fit into the broader ecosystem and the important roles each of them play in maintaining it. Pointing to the tendency of many zoos and other environmental organizations having a “save the endangered species” mentality, Nowicke explained that at the EcoVivarium, the organization focuses more on a broader push to preserve and save ecosystems at-large.

“It is not enough (to push) to save a single species,” stated Nowicke. “We can do that all day long and animals will live in zoos and people will look at them through glass.”

Nowicke also said that in an era in which many children live and breathe during their waking hours using their technological devices, rather than spending as much time outside and in nature, the organization’s educational mission has become that much more vital.

“If we could change one child’s outlook, that child could have the impact that needs to be there and that child can be the one who solves the dilemma or finds the solution (to preserving ecosystems),” said Nowicke. “If you want to go look at interesting animals and read interesting facts, you can do that at the zoo. Our goal here is to take the connection to the next level and have people understand is what their relationship is with animals and why they’re essential. And hopefully change a few habits along the way that may make it better for everybody.”

On Saturday, Sept. 22, the EcoVivarium will play host to a free entry day under the banner of the Smithsonian Magazine’s Museum Day. Escondido’s San Diego Archaeological Society, too, will take part in that day. Normally, entry fee costs $10 for adults, $9 for seniors and $8 for children aged 17 and younger. The EcoVivarium will also be present at the Dec. 1 STEAM (Science, Technology, Engineering, Art & Mathematics) Maker Festival, set to be held at the Del Mar Fairgrounds. Thanks for the great article Steve! We look forward to meeting all The Coast News readers soon!