San Diego County Water Authority board recently lowered the limit for a project to trigger a project labor agreement from $100 million to $1 million. Photo courtesy of SDCWA

In a union-friendly decision, the regional water board voted on Jan. 27 to lower the current limit for construction projects from $100 million to just $1 million, ensuring most, if not all, future construction plans will be considered for a project labor agreement, or PLA, which is essentially a pro-union construction deal.

“This is just authorizing staff and our general manager to negotiate, and it will come back to the board,” said Gary Croucher, board president of the San Diego County Water Authority.

The negotiated project labor agreement is expected to return to the board for approval later this year.

In 2010, the San Diego County Board of Supervisors banned PLAs on county construction projects, which proponents argued would “produce a fair and open competitive bidding process for all contractors and employees, regardless of their union affiliation.”

Two years later, San Diego voters overwhelmingly approved a ban on a citywide ban project labor agreements for construction projects, “except where required by state or federal law, or as a condition of the receipt of state or federal funds,” according to the ballot language. However, the San Diego City Council’s Rules Committee recently approved a ballot measure seeking to overturn the city’s PLA ban.

But the decision sparked a contentious debate centered on union control over future projects. County water officials sparred with Supervisor Jim Desmond, who questioned the validity of PLAs, despite an attempt by Encinitas Deputy Mayor Joe Mosca, a representative of the San Dieguito Water District, to shut down the supervisor’s line of questioning and comments.

Desmond said pro-union deals run against the board’s calls for equitable and fair treatment of all workers. While non-union shops are permitted to bid on projects, they are only allowed to use “core” workers, or individuals from management, architects or engineers, while the remaining employees must come from a labor union pool.

Desmond and other PLA opponents said the number of non-union core workers is low, usually around five employees. Desmond also pointed to the county’s union workforce at less than 20%, compared with non-union workers at 80% or greater.

With those numbers and the unlikely opportunities for non-union workers to secure work, Desmond said the project labor agreement will require the unions to shuttle in other union workers from out of the county.

“No one group, especially in this day and age, should be excluded from working on projects,” Desmond said. “We talk about equity all the time. It’s a travesty and I’m appalled. Eventually, on a big project, they’ll have to go outside the county to get union workers.”

Proponents of PLAs, such as Jerry Butkiewicz, of San Diego, and Nick Serrano, chief of staff for San Diego Mayor Todd Gloria, said project labor agreements lower costs, utilize a better-trained workforce, don’t exclude non-union workers, deliver a prevailing wage and hire local workers. However, a prevailing wage must be paid to all workers on a public project, according to state law.

Proponents also cited how projects come in under budget, invest in apprenticeship programs, workforce development and provide workers with stability.

Hall drew fierce blowback from Serrano after suggesting the Water Authority’s project labor agreement was already negotiated with union leadership prior to the official negotiation period, which has yet to begin.

“How long will we allow this misinformation to go on?” Serrano said. “I’m appalled. No, nothing has been negotiated. I’m taking deep offense that this PLA workgroup didn’t do our work and is shooting from the hip.”

Desmond requested the National Black Contractors Association, which has an apprenticeship program, be included in negotiations after the SANDAG board carved them from the out last year. Croucher said they would be included.

Also, the board battled over what constitutes projects coming in “under budget.” Proponents of the PLA said projects cost less than first projected, but opponents claimed otherwise, arguing unions can include an additional 10% to 30% increase, or whatever was negotiated, to the total cost, pushing the total cost over budget. 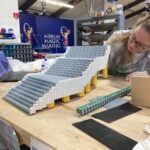