The pool at the Escondido Country Club sits with filthy water, while the clubhouse is littered with trash and graffiti. Two groups of residents have formed with one in support of New Urban West Inc.’s plan and the other submitting one of its own for new homes. Courtesy photo

ESCONDIDO — Since the closure of the Escondido Country Club in 2013, the property has yet to be developed.

New Urban West, Inc. wants to develop the property, dubbed “The Villages,” which calls for 392 homes, 46 acres of open space including a 32-acre green belt, four parks, a dog park and renovating the dilapidated clubhouse featuring a restaurant, bar and pool.

The Escondido Country Club Homeowners Organization has objected to New Urban West’s plan for several years, while Renew Our Country Club is in support.

“We just want a reasonable and responsible project,” Mike Slater, president of Escondido Country Club Homeowners Association, said. “ECCHO did a white paper on all the density transfers that were done back in the 1960s and ‘70s.”

Slater said his group is urging residents to show up en masse at the Planning Commission meeting to oppose the project. He said the goal is gather several hundred residents to “express their views.”

In the meantime Escondido Country Club Homeowners Organization sent a letter on Oct. 4 with a draft conceptual master plan for 158 units, via attorney Everett Delano.

“ECCHO’s 158-alternate plan does not require a rezoning under the current 2012 General Plan and would yield 63 percent less traffic — or 2,969 fewer daily vehicle trips — according to the developer New Urban West Inc.’s ‘The Villages’ Draft EIR,’” the ECCHO statement reads.

Slater said the 158 units is a fair assessment of the property. That proposal, though, would not be developed by ECCHO, it would prove there is an alternative measure for development, he added.

“We decided to do a plan and submit it as an alternative concept plan during the draft EIR period,” Slater said. “It didn’t get received well by the planning division because it didn’t have walking trails and whatnot. So, we dressed it up. We showed everything that could be on New Urban West’s plan could be on ours.”

On the other side, Miles Grimes of Escondido, who is a founding member of Renew Our Country Club, said he and his group support the New Urban West proposal, noting the area is in significant need of upgrades and amenities.

While Escondido Country Club Homeowners Organization rails against more traffic (a 63 percent increase according to their reviews), too many homes and the overall scope of the project, Renew Our Country Club cites current higher crime and lower property values as two main points to support the project.

Grimes said he and his group are also fighting against rumors and false information spreading about the New Urban West project.

Renew Our Country Club has plastered photos of the rundown clubhouse all over social media, noting the graffiti, boarded windows, trash and transients coming through the property.

“There is a portion of the neighborhood that likes the proposal,” Grimes said. “We’re just a group that is on the same page. I’m done with the mess that is the country club. Recently someone started a fire in the clubhouse, a car mowed down a fence.” 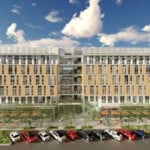