The annual Oktoberfest in Munich, Germany, was canceled this year for the first time since 1949. Photo by Sebastian Lehner via oktoberfest.de/en

In a normal year, the last of more than 6 million lovers of beer, brass band polka, parades and bratwurst would be on their way home from Oktoberfest in Munich right about now, bellies straining the straps of their lederhosen. But this is 2020, and nothing is normal.

The largest beer festival in the world was canceled way back in April due to the risk of COVID-19 spread. The festival has been canceled before, during wartime and twice during outbreaks of cholera, but not since 1949. It was a major blow to the beer world and prescient of cancellations to come, including the largest beer festival stateside, the Great American Beer Festival in Denver.

Oktoberfest began in the early 1800s as part of a Bavarian wedding celebration and has been growing ever since. In recent years, nearly 17 million pints (roughly 8 million liters) of beer were served during the 16-day event.

The only beer allowed to be served at the Munich Oktoberfest must be brewed within the city limits by six of Germany’s most esteemed brewers, including Augustiner-Bräu, Löwenbräu, Paulaner, Spatenbräu, Hacker-Pschorr-Bräu and Hofbräu-Munchen.

The original Oktoberfest beer was a Märzenbier, which literally translates to March beer for when it is brewed, and then put away to cellar until fall. In the 1950s the Fest Bier, a golden Helles lager, became the more common Oktoberfest offering.

Even though we cannot partake in the festival itself we can still enjoy one of these seasonally appropriate beers. In addition to the imported German originals, many U.S. craft brewers make beers in tribute. Some honor the original malty, full-flavored amber Märzenbier, and others the more modern pale, crisp and golden Helles-styled lagers served in Munich today.

Seasonal beers are how I keep track of the seasons. When the first Oktoberfest beers hit the shelf at my local beer purveyor or on the tap list of a favorite brewpub, I know summer is over. Nights will begin too cool off. The leaves will be changing color (in our case, the flowers, but still), and the days will begin to noticeably get shorter. It is time to celebrate good fortunes and harvest.

When my calendar ticked over to the new month, I took a long bike ride around North County collecting beers. By the end of the day, my fridge was full of Oktoberfest beers including Societe Brewing Fest Bier (which was canned for the first time this year), Enegren Valkryie German-style Amber, and Bagby Brewing

It’s Festastic. It was my own little Oktoberfest parade that ended next to a fire with a tall stein and some traditional brass band polka. Oom-Pah, Oom-Pah, Oom-Pah! Ein Prosit!

Funfest fact: Beginning in 1950, Oktoberfest has opened with a 12-gun salute, followed by the tapping of the first keg of Oktoberfest beer by the Mayor of Munich with the proclamation, “O’zapft is!” meaning “It is tapped!” The first beer is drunk by the President of Bavaria.

Be sure to check out the upcoming episode of the Cheers! North County podcast featuring my full conversation with Priya Bhat-Patel, Carlsbad City Councilwoman and candidate for State Senate, which comes out Friday, Oct. 9. Listen on the show’s homepage or subscribe on your favorite podcast platforms, including Apple Podcasts, Spotify and now Amazon Music. 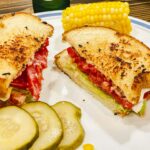 Lick the Plate: For the love of BLTs