Carlsbad High School has a long tradition of sending its student-athletes to Division I and Division II colleges. Photo by Steve Puterski
Support The Coast News. Click here.
CARLSBAD — National signing day had a different twist this year due to the COVID-19 pandemic.

Regardless, Carlsbad High School is sending off at least 16 athletes to the collegiate level next year in a variety of sports. The Lancers have a storied tradition of sending a number of athletes to Division I programs each year, along with athletes signing with DII, DIII and NAIA schools.

Most of the students signed the national letters of intent during the NCAA’s early signing period last week.

This year, though, was an opportunity for Athletic Director Sam Eshelman to showcase athletes competing in more niche or Olympic-type sports such as water polo and beach volleyball. Ten athletes participated in the video signing day event, while six other athletes did not attend.

The San Diego Sports Association holds an annual in-person event highlighting some of the county’s top student-athletes at Petco Park. CHS has sent kids down there in the past, Eshelman said, but this year he wanted to focus on CHS athletes.

“I thought it went really well,” Eshelman said. “I know it’s not ideal. What was really cool was to hear them talk about their process. I thought it was a really fun, shared moment for our Lancer sports community.”

He said the event showcased both the athletic and academic talents of participating student-athletes. Laurel Moody (softball) and Aidan Sayin (football) and in the going through the academic review process at Brown University and the University of Pennsylvania, respectively; while Kaylie Ronan (girls soccer) is attending Notre Dame and Sullivan Lundy (boys water polo) will enroll at the U.S. Naval Academy. Ivy League schools do not offer athletic scholarships.

Ronan, though, will be part of one of the premier programs in the country at Notre Dame. A perennial power in women’s soccer, the Fighting Irish have three national championships and made a second-round appearance in the NCCA Tournament last season.

“It has a big history,” she told the group during the event. “It was a perfect fit for me.”

Additionally, teammate Lexi Wright will be attending UCLA, which finished last season ranked No. 4 in the country. The Bruins have a deep history as one of the most dominant programs in the country with alumnae including U.S. Women’s National Team stars Sydney Leroux and Abby Dahlkemper and former USWNT coach Jill Ellis. 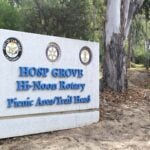