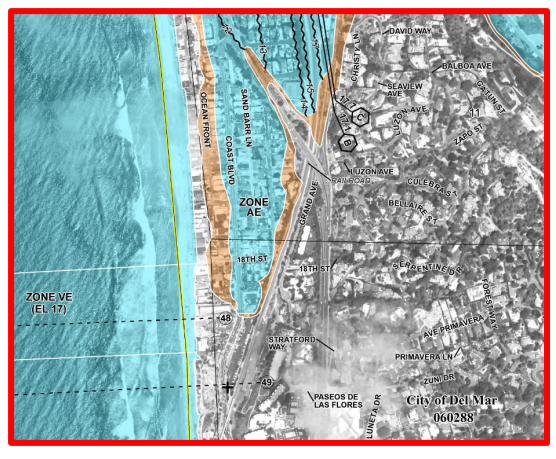 DEL MAR — As of Dec. 20, 2019, Federal Emergency Management Agency (FEMA) has implemented a new flood map in the city of Del Mar.

FEMA works as a part of a flood management program in order to designate flood zones, which includes applying limits to development in locations that are vulnerable to flooding.

“The Special Flood Hazard Area as a whole represents the area subject to flooding by the 1 percent annual chance flood, which the city maps and regulates as Del Mar’s ‘Floodplain Overlay Zone,’” the city said.

A draft of the map was released by FEMA in March 2017, after which the city went through a 90-day appeal period although no appeal was filed. FEMA was working alongside the Port of San Diego regarding a technical issue with that aspect of flood panel.

After technical errors were amended, a new firm map was issued and took effect this last December.

“We are complying with Federal Law,” Amanda Lee, Del Mar’s principle planner, said. “The federal map was updated (by FEMA) and we have to comply.”

It has been 30 years since the Flood Insurance Rate Map (FIRM) — a map that highlights a community’s areas subject to flooding, their base flood elevations, floodway boundaries and flood zones — has been modified.

The new map accounts for environmental changes that have occurred in Del Mar over the last 30 years. The FIRM map is now accounting for the following:

1) Wave setup: which is the increase in the standing water level when breaking waves are present.

2) Wave run-up: When the waves vertically uprush on the beach resulting in bluff erosion.

3) Dune erosion: A slumping process as a dune loses sand as it is continually under attack from waves.

4) Flooding according to the current water levels.

6) Seawall overtopping: Structures that are built higher to resist storm surges and the land against waves from going over the top of the barrier.

“(A) community adopts and enforces a floodplain management ordinance to reduce flood risk to new and existing development in mapped floodplains,” FEMA said.

“Moderate to low-risk areas are labeled Zone X (or Zones B and C on older maps). High-risk areas begin with the letter A or V. Areas where the risk is not known are shown with the letter D,” FEMA said in “Map Changes and Flood Insurance: What property owners need to know.”

According to the now modified flood map, Zone VE has an annual flooding chance of 1% and contains a risk of wave-induced hazards from wave run-up, high-velocity flow, wave overtopping and breaking waves.

Zone AE also has a 1% chance annually of flooding but has a lower chance of wave hazards.

Additionally, both zones VE and AE fall under the requirement for mandatory flood insurance.

The unshaded Zone X is the area that contains the least possible flood risk. The shaded in Zone X, however, has a 0.2% chance of flooding annually.

These flood-prone areas are generally located along the San Dieguito River and in the North Beach neighborhood.

To check and see if you land under a high-risk flood zone, the new map can be found by going to msc.fema.gov/portal. Additionally, for information regarding flood insurance, how to reduce insurance rates there is information available at FloodSmart.gov or call (877)-336-2627 to speak with a flood map specialist. 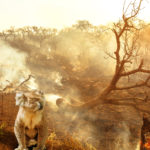 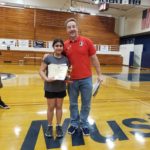