In 1962 I bought a Wardy Surfboard for $45. I quickly sold it for $30 to buy my second board, a high-performance Hansen with a redwood and a balsawood stringer sandwiched side by side. I cherished that board to the point I sometimes slept with it. After some jerk took that board and ruined it in the rocks I bought another Hansen, and on it learned to do decent turns, cutbacks and, on occasion, ride the tip.

In the summer of 1970, I moved to Encinitas, a few blocks from the Hansen shop. It was then I discovered that Hansen was more than the name on some cool surfboards, but a person whose first name was Don. It would be years before I learned how Hansen had hitchhiked to California from North Dakota in the mid-‘50s to become a top surfer and one of the world’s best surfboard makers.

In 1971 I worked in Hansen factory long enough to gain sufficient cash to move to Australia and New Zealand. Upon my returned to Encinitas two years later, I found everything had changed except that the longest standing surf shop in town, Hansen’s was still located on 1105 S. Coast Highway. There, Cheer Critchlow crouched, frozen in time on the face of the iconic building.

Besides Critchlow, Hansen team riders include some of greatest surfers of all time: Linda Benson, L.J. Richards, Mike Doyle, Rusty Miller and the legendary Margo Godfrey Oberg rank highly among them. Even Pipeline master Gerry Lopez was on the team for a while.

Just last week, I visited Hansen’s, lingering in their relatively new Boardroom, where my covetous eyes surveyed the 500-plus surfboards on display. These ranged from with cool sticks shaped by Craig Hollingsworth, to some futuristic wave craft by Ryan Burch and Daniel “Tomo” Thompson.

I pawed through the racks for an hour or so, hopelessly dreaming of hanging 10 on the noseriders and blasting airs on the Tomo’s. Making a hard landing near reality, I wrapped my fingers around the rails of the luscious 7’3” single fin in the adjacent photo. Is that a reproduction of model from the late ’60s called the Derringer? I’m not sure, but it quickly ceased being a mere surfboard and transported me like a time machine connecting me to the past while I smoothly rode into the future.

2) The website for the Thorp Institute of Integrated Medicine is www.thorpinstitute. Their phone number is (858) 539-6111.

For those interested in the Feb. 11 Waterspot column “Hope for Hurting learning more about this technology, there is an introductory training session in Carlsbad from Friday, Feb. 22 through Sunday, Feb. 24, RSVP at (858) 539-6111

Help a brother out:

Longtime surfer Tim Beard is the owner of a classic redwood surfboard made in the early 1930s. The board, which has been in his family for over 70s years, is now is for sale to help pay Beard’s medical expenses. Anyone interested in owning a piece of surf history and helping out a fellow surfer is invited to contact me at: Vista Historical Museum: a place to view city’s unique past 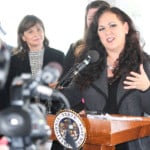