Diana Lovejoy, 43, of Carlsbad and Weldon McDavid Jr., 49, of Fallbrook, entered their pleas on charges of attempted murder, conspiracy to commit a crime and great bodily injury for a Sept. 2 ambush, which resulted in the wounding of Lovejoy’s estranged husband.

They are currently being held in custody on $2 million bond and will appear in court Wednesday.

The shooting targeted Gregory Mulvihill, 45, of San Marcos, the estranged husband of Lovejoy. Mulvihill and Lovejoy have been locked in a custody battle over their young son.

Mulvihill was awarded a temporary restraining order on Aug. 9.

According to court records, Lovejoy and McDavid began conspiring on or about Aug. 1.

Police said the two met at Iron Sights, the Oceanside gun range where McDavid was employed and where Lovejoy had taken lessons from him.

Prosecutors allege they began their plot when McDavid told Lovejoy to buy a TracFone, a mobile prepaid cell phone, known as a “burner” device, to avoid detection from authorities.

The two had also scouted out a burial site for Mulvihill.

On the day of the shooting, both defendants met at the La Costa park and ride in different cars. McDavid, according to court documents, was in possession of a long rifle.

Lovejoy then dropped McDavid off at his hiding spot before luring Mulvihill to meet at a road off Avenida Soledad near Rancho Santa Fe Road at about 11:15 p.m., according to reports. Lovejoy drove away and waited, while McDavid allegedly shot Mulvihill several times. Mulvihill survived the shooting.

Court documents reveal that McDavid told Lovejoy he did not kill the estranged husband and the two proceeded to drive back to the parking lot and fled.

Carlsbad police were alerted to the scene and the neighborhood was locked down for several hours.

After an investigation, detectives arrested Lovejoy and McDavid last week.

According to McDavid’s Facebook page, he owns McDavid Firearms Training. The company is based in Bonsall, provides various training, including home protection plans and classes and employs three instructors, according to its website.

On the company site, McDavid said he started the business to provide the highest level of training. In addition, he “saw things in some organizations that were missing and decided to fill the gaps.”

Lovejoy, meanwhile, is a former personal trainer and technical writer. 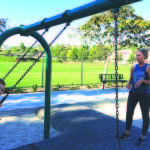 Look at this amazing Connection…
This David Weldon Jr. Was involved in the same plot just 8 years ago with another Carlsbad wife in a possible murder….