Mayah Carlton, 17, has been using chalk to create artwork outside her San Marcos home. Courtesy photo

SAN MARCOS — North County residents have found a bit of joy during this troubling time thanks to the kindness of a local and talented teen artist.

Mayah Carlton, a 17-year-old junior at San Marcos High School, has been spending her newfound free time creating dazzling art on her sidewalk and driveway. Equipped with chalk, the teen artist has taken requests from neighborhood children, creating every character imaginable from Sailor Moon to Moana.

“Making others around me smile on their walks past my house or while scrolling through Facebook really fills my heart,” Mayah said. “(It) makes me so happy and inspired to create more art and spread happiness in these uncertain times.”

Mayah, who comes from a Navy family of five, said she’s always enjoyed art as a pastime. It’s been years since she’s used chalk, though — something that has been popular in recent days as people use chalk to color their sidewalks or write inspirational messages.

“I used to play with chalk a lot when I was younger, but I haven’t really used it until I started doing the chalk art during the social isolation period of this pandemic,” Mayah said. “Because I have a lot more free time than I usually would if we weren’t socially isolated, I make a new chalk drawing almost every day.”

Mayah said she keeps her artwork flowing outside of her home because of the joy it has brought to those around her.

“My neighbors walking past while I’m working on a new piece sometimes compliment my work,” Mayah said.  “My favorite responses to my work are people saying things like how they like to walk past my house with their kids to look at the art and little characters.”

For Lily Carlton, Mayah’s mother, nothing has made her more proud than seeing how much her daughter cares for others.

“It’s been tough for my daughter as she loves school and her friends, but instead of dwelling on something she has no control over, she has found something she can do for others,” said Carlton, whose family settled in San Marcos five years ago after her husband’s tour in Okinawa, Japan. “She has been fulfilling requests from the neighbors and looks forward to this time she can spend outside creating, after her classwork.”

Lily Carlton said the extra steps taken by her daughter to spread happiness isn’t something new.

“In Okinawa, the neighboring kids would all gather at our house because Mayah would draw for them as well,” said Carlton, a mother of three girls. “Recently she helped a high school friend by making 28 encouragement cards using watercolors for an assisted living facility in San Marcos.  She is always thinking of others.”

Carlton said she hopes her daughter’s generosity compels the public to also think of others as the world remains on partial lockdown as a result of the coronavirus pandemic.

“For the public and our community of San Marcos, a simple act of kindness goes a long way,” Carlton said. “If we help each other and build each other up we will get through this as a stronger community.”

Although Mayah is the one bringing joy to those around her, it’s the essential workers who inspire her, she said.

“All the essential workers that work tirelessly to keep our families safe and fed and allow us to stay home and safe while they are out there working (inspire me),” Mayah said. “They all do their part to keep us all safe and I hope to do my part to keep everybody’s spirits up.” 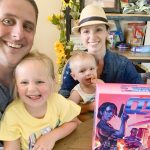 Wow this is great! Would love to see Little Critters art! My two year old has been loving the books.