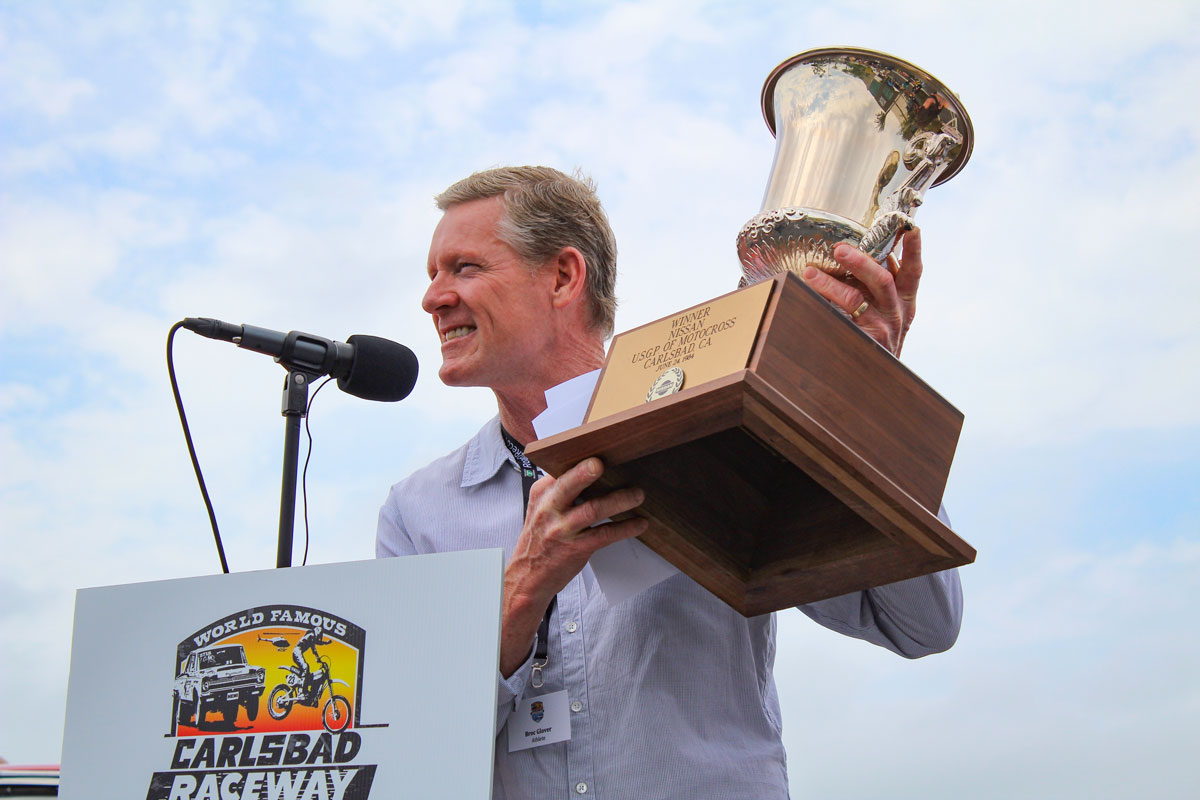 Broc Glover, winner of the 1984 U.S. Grand Prix of Motocross at Carlsbad Raceway, holds up his original trophy during a ceremony on June 22 to unveil a raceway memorial monument in Vista. Photo by Jordan P. Ingram

VISTA — Once a hotspot for international motorsports racing and diehard gearheads, the Carlsbad Raceway will be permanently memorialized with a monument near the original raceway grounds, it was announced during a June 22 ceremony in Vista.

The monument site, located at Keystone Innovation Industrial Park on the border between Carlsbad and Vista, will overlook the former raceway and is directly in front of two popular Vista breweries, Eppig Brewing and Dogleg Brewing Company.

The project will break ground immediately and is expected to be completed by summer 2022.

Filmmaker Todd Huffman came up with the idea for a monument in 2010 after completing his documentary, “Carlsbad USGP:1980 – One Day of Magic,” on legendary motocross rider Marty Moates. The film takes an inside look at Marty’s unexpected victory of the U.S. Grand Prix of Motocross in 1980 at Carlsbad Raceway, which was broadcast on ABC’s “Wide World of Sports.”

Huffman later teamed up with David Moates, Marty’s brother, and Scott Cox to brainstorm the monument project. After spending roughly 10 years finding a suitable location, the group of friends and longtime race enthusiasts was finally able to secure a spot in Vista.

“It’s the perfect location overlooking the raceway property,” said Vista Mayor Judy Ritter during her speech at the event. “We are excited to watch this progress.”

“When Todd (Huffman) called and said, ‘Hey, I’m working on this,’ I said absolutely,” said Jimmy Button, co-founder of Road 2 Recovery. “Road 2 Recovery is so happy to be part of this. This is a meaningful place to a lot of people.”

Button was himself critically injured in 2000 while riding a motocross bike after he flipped over the handlebars and broke his neck. Since the accident, Button has regained most of his movement back and helped start Road 2 Recovery to help other injured riders.

The monument will incorporate stories from the raceway’s 40-year run, including its founding by Larry Grismer and Sandy Belond, who bought the property in 1961 and opened the raceway three years later. At first, the raceway featured only a dragstrip but motorcycle and auto races followed shortly thereafter.

“We love this place,” said Glover, who won the 1984 U.S. Grand Prix at Carlsbad Raceway. “It was a tough motocross track. If you tried to override this track, it would come up and bite you.”

In 1986, Ricky Johnson won the final U.S. Grand Prix of Motocross at Carlsbad Raceway. Johnson, who grew up riding motorcycles in El Cajon and now teaches off-road driving techniques at military bases across the country, told The Coast News he just doesn’t want the raceway to be forgotten.

“(Carlsbad Raceway) was a huge part of my life and I hate to see it just be pushed over with industrial buildings and nobody remembers what was once there,” Jonson said. “The greatest races in the world were there.”

In 2004, Marty Moates rode the final lap at Carlsbad and for decades, the legendary raceway was seemingly lost to overgrowth and industrial development — until now.