Don Myers, known locally for his stained glass and mosaic art, will create a 12-by-13-foot glass mosaic mural of a community of local sea life, as it resides below the surface of the Pacific Ocean just off our beaches. The mural will depict a variety of marine animals and plants, including starfish, tuna, sea grass, clown fish, jack mackerel, sea anemone, sharks and coral.

MainStreet is offering the community three opportunities to help bring this work of art to life by sponsoring one of the 77 sea animals and plants, by donating directly to Art That Excites or by participating in workshops to help create the glass mosaic mural. Ranging from $100 to $7,500, sponsorships vary based on sea life size and type, from starfish and sea grass up to the mural’s only giant Pacific octopus. Sponsors will be recognized on a granite plaque next to the mosaic mural, which can contain the name of the sponsor, the sponsor’s family, someone the sponsor wishers to honor, or a group or business. The mural-creation workshops will be taught by Myers, who has led previous efforts to create glass mosaics, so that we can assemble this mural as a community. Additional details for the workshops will be announced as funding for mural glass becomes available.

The installation of the ocean glass mosaic mural completes the first phase of Art That Excites program. MainStreet Oceanside invites you to visit our office, at 701 Mission Ave., to see the full color artist rendering of the mural and to pick up your sponsorship application.

The second mural project of the Art That Excites program is also moving forward. Gloria Muriel was selected as the winning artist to create the mural, which will be installed in black-and-white, on the west wall of That Boy Good BBQ and Northern Pine Brewing at 326 Horne St.

This has led to a collaborative mentoring opportunity in which Muriel will be working with local young artist Isabel Figueroa on the installation of an additional mural that illustrates the rich history of the Eastside “Posole” neighborhood. Each section of Figueroa’s mural tells a story, and the intersection of the two murals will represent the past and future of Oceanside. MainStreet thanked its newest investor, property owner Ronald Perlman. Perlman is supporting Figueroa by funding her mural on the north wall of the building. Both murals are scheduled to be completed by January 2020. 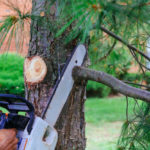 Tree clean up begins on 101 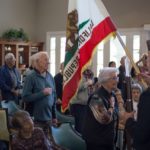