Harbor stakeholders are looking at proposals to enhance safety services in the Oceanside Harbor. Photo by Samantha Nelson

OCEANSIDE — City staff, along with Harbor stakeholders, are exploring new, more efficient ways of providing safety and administrative services in the Harbor area and waters.

The city has organized a committee of various Harbor leaders and stakeholders to look at proposals to reorganize the Harbor Patrol Unit.

The original Harbor Police Department was absorbed by OPD in 2009. Since then, Harbor tenants say there has been a degradation of services, despite the Harbor District being charged more throughout the years to fund the unit.

“It’s not to say they haven’t done a great job, it just comes down to the fact that OPD is a law enforcement agency and harbor safety and rescue is not really in their wheelhouse,” said Oceanside Yacht Club Commodore Mark Mallaby.

Mallaby is one of the Harbor committee leaders looking into the different proposals to enhance services in the district.

According to the Harbor group, the loss of services, since the merge, includes the elimination of emergency medical technicians (EMTs), swift water rescue technicians, discretionary non-emergency vessel assistance towing and salvage, and maintenance and support services like salvage SCUBA diving.

The unit in its current form has also undergone staffing issues due to low interest from OPD officers to fill vacancies, according to the Harbor group. This has contributed to high overtime costs to ensure there is staff available and has been difficult to address due to the rotating of officers through the unit.

One proposal brought forth would move the Harbor Patrol Unit from OPD and merge it with the city’s Lifeguard Division, which is part of the Fire Department. Those supportive of the proposal argue that by merging the Harbor Unit with the Lifeguard Service, the Harbor would be able to recover the eliminated and reduced services, as well as reducing the cost for those services by an estimated $400,000 annually.

The Harbor is an enterprise fund and operates on user-supported services, such as slip rentals, leases to businesses and parking fees. The Harbor is not supported by property taxes.

More than 75% of documented law enforcement actions by Harbor officers occur outside of the district.

Mallaby said there is certainly still a need for OPD officers in the Harbor area for land-based activities; but when it comes to water activities, the need for enforcement is small compared to the work needed for Harbor safety and rescue.

Groups like the Oceanside Outrigger Canoe Club (OOCC) have come forward to support the proposal to remerge the Harbor Unit with the Lifeguard division.

“This proposed reorganization would allow the Harbor District to reestablish the services necessary for the security of slip renters, casual boaters and the thousands of visitors who frequent Oceanside’s harbor and beaches,” wrote OOCC Board President Deb Manzanares, in a letter addressed to City Manager Deanna Lorson.

The group wants to see a 24-hour professional Lifeguard Service in the Harbor.

Harbor Manager Ted Schiafone, who is also part of the Harbor stakeholder group, said he is supportive of looking at new ways to provide safety and administrative services to the Harbor.

“We need to operate as efficiently as possible while still providing the appropriate safety and administrative services,” Schiafone said via email.

Schiafone said there are several ways a Harbor Patrol Unit can be organized, and that the stakeholder group, along with the city, are exploring all options and meeting with more stakeholders before any direction is decided.

Deputy City Manager Jonathan Borrego has been working with the Harbor stakeholder group. He said staff should be presenting some recommendations regarding this initiative in late 2020 or early 2021. Local group urges residents to send letters of thanks to firefighters 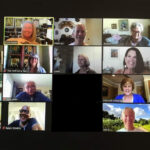 When I had a boat in the harbor I was taxed by San Diego tax collector. One bill for boat value and second bill for slip.Your article says No support being given by San Diego???
Where did my taxes go??