We’ve been there, we’ve seen this movie before. Nothing should surprise us, but it continues to do so. We know that anything goes in March Madness as these student-athletes, coaches, universities and fan bases try to cover the “CHIP.” That’s the NCAA men’s basketball championship.

It didn’t take long. In a First Four game in Dayton, Ohio, on Wednesday night, it took Notre Dame two overtimes to knock out Rutgers, 89-87.

And once the 64-team bracket was set, the first-round games on Thursday and Friday — spread across four regions and eight venues throughout the country — did not disappoint.

Here are my takes on some of those games:

— Colorado State blows a 15-point lead to Michigan and is the first team eliminated from the round of 64.

— The 12-5 upset is always a popular bracket pick, and this year didn’t disappoint as 12 seed New Mexico State notches the second such upset of the day, beating 5 seed U-Conn, 79-63.

— Upset of the tournament: 15 seed Saint Peter’s knocks out blue-blood Kentucky, a 2 seed, 85-79 in overtime. Saint Peter’s is a small Jesuit college in Jersey City, New Jersey, with less than 3,000 undergraduates. The Peacocks are making only their fourth appearance in the NCAA Tournament.

— San Diego State plays great first-half defense but blows a nine-point lead late in the second half and loses to Creighton in OT, 72-69. The Aztecs’ Achilles heel all year was free throw shooting and it came back to bite them, as they made only 10 of 17 from the foul line. This was a game they had and they let it slip away.

— Much more sedate compared to Thursday, but still some close, hard-fought games, including 10 seed Miami over 7 seed USC, 68-66, and 13 seed Chattanooga leading for all but 25 seconds of its game to 4 seed Illinois before losing 54-53.

— No Saint Peter’s-like upsets, but a pair of 11 seeds, Notre Dame and Iowa State, knock out a pair of 6 seeds from the SEC, with the Fighting Irish beating Alabama, 78-64, and the Cyclones topping LSU, 59-54.

— The second round is usually somewhat more relaxed than the Thursday-Friday madness. I said usually.

— Among the high seeds not reaching the Sweet 16 are 1 seed Baylor, 2 seed Auburn, 3 seeds Tennessee and Wisconsin and 4 seed Illinois.

(My picks in ALL CAPS)

Join us at 9 a.m. Saturday on The Mightier 1090 AM ESPN Radio! Read more “Inside Information.” 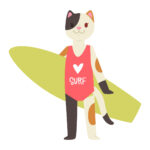 What cats have taught me about surfing and life