The answer is a little blue penguin, and 15 of these nuthin’-but-cute birds are settled into their new home at Birch Aquarium at Scripps Institution of Oceanography at UC San Diego.

Visitors can watch the little blues as they torpedo through the clear water, hop and waddle onto the rocky “shore,” a duplicate of their native habitats in southern Australia, Tasmania and New Zealand.

The Beyster Family Little Blue Penguins, named after the exhibit’s largest donors, is a multimillion-dollar, 2,900-square-foot habitat that features an 18,000-gallon pool, multiple cozy burrows, a sandy beach and plants native to their home habitats.

The enclosure is designed so visitors of all sizes, ages and abilities can see the 2- to 3-pound penguins above and below the water line.

The names and personalities of each penguin are posted on a nearby wall, and color-coded bands identify which ones are on display.

Meet Katie of “overall quiet demeanor (who is) a very pleasant bird…(unless) males start getting into a squabble around her.” Then she “fights back ferociously.” Katie also is likely to “eat an impressive amount of capelin (a small fish), mind her own business and pick the nicest nest.”

Nero, on the other hand, is most likely to “push the females out of the way,” while Magic, another male, has a fun personality, loves on anyone who gives him attention, and is likely to be “the first to investigate something new.”

Benefactors named Katie, Nero, Magic and three other penguins. One penguin – Azulito (Spanish for “little blue”) – was named in an online contest and won the prize for the most easy-going penguin who gets along with everyone.

Penguins are a fairly common site in zoos, but only a few exhibit little blue penguins, including the Dallas World Aquarium, Bronx Zoo, Adventure Aquarium, Louisville Zoo and Cincinnati Zoo.

The birds at Birch Aquarium are “happy, thriving and adapting nicely to their new surroundings,” according to Kayla Strate, the aquarium’s lead penguin aquarist. “Eventually, we’re hoping the penguins will form a successful breeding colony.”

The little blue penguin isn’t just another pretty face, though.

“Penguins are great indicators of environmental changes in the ocean and will help Birch Aquarium to better connect understanding to protecting our ocean planet,” said Harry Helling, the aquarium’s executive director.

If you can tear yourself away from the little blue penguin exhibit, there are plenty of other things to see and do at the bluff-top aquarium: the seahorse and seadragon exhibit; the always-mesmerizing jellyfish tank; and the ceiling-high kelp-forest tank, home to dozens of fish and other sea creatures of all sizes and colors.

A stroll out the rear door to the patio offers an opportunity to explore touch tanks filled with sea cucumbers, starfish, urchins and baby sharks. The patio also offers an arresting view of the La Jolla coastline, which reminds us why we pay a premium to live in San Diego County.

If visiting the aquarium isn’t possible, watch the little blues via the live webcam.

Have a travel experience to share? Email [email protected]. 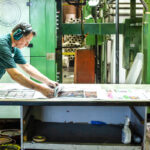