Councilman Chris Rodriguez is facing a lawsuit that is headed to a jury trial in October. Courtesy photo./The Coast News graphic

OCEANSIDE — A lawsuit against Oceanside City Councilman Chris Rodriguez will go to a jury trial in October after the 49th Congressional District candidate was accused of failing to repay nearly half a million in loans to a former business partner.

Mary Harper, a San Diego real estate investor, originally filed the lawsuit in 2019, alleging that Rodriguez owes her and her family almost $500,000 that they loaned him to work on properties in Vista, Temecula and El Cajon.

Harper claims that instead of repaying the loans, Rodriguez sold the properties and used some of the money to improve his personal residence on Puerta de Lomas in the Morro Hills area at the border of Oceanside and Fallbrook.

The case will go to trial on Oct. 7 in San Diego County.

Brian Maryott, one of Rodriguez’s opponents in the Republican primary, seized on the news of the lawsuit, arguing the nature and credibility of the accusations against Rodriguez should be a disqualifying factor for his candidacy.

Maryott, Rodriguez and Orange County Supervisor Lisa Bartlett are all leading the Republican field in an attempt to unseat Democratic incumbent Rep. Mike Levin, who has held the seat in CA-49 since his election in 2019. Early election results show Rodriguez is currently third in the June primary election after Levin and Maryott.

“Chris Rodriguez must come clean about his legal issues. It is not normal to get repeatedly sued for fraud and deception by investors who have to sue because they believe they were swindled out of their retirement savings,” Maryott said in a statement.

“These unnerving allegations are far too common in how he conducts his business, and it’s the height of arrogance for Rodriguez to think he could be on trial in October during the home stretch of a general election. Rodriguez needs to do the right thing: repay the people he owes money to and apologize.”

“Rodriguez is not a good guy, he scammed these people and took $500,000 from an elderly lady and didn’t pay it back, so people need to know the real deal with this guy,” said Stephen Puetz, a consultant for the Maryott campaign.

Puetz urged Republican primary voters to consider how the lawsuit would impact the viability of Rodriguez’s candidacy in a general election.

“For Levin, it would be a dream running against this guy who is going on trial for fraud in October just a month before the election, how much more perfect can it get,” Puetz said. “If [Rodriguez] was ever going to settle in this case he would have settled by now, but with this trial taking place potentially in the middle of a general election campaign, it’s literally the worst possible timing, the guy is a complete disaster.”

Rodriguez wholly denies the claims made in the lawsuit and suggested that Maryott is trying to utilize the allegations against him to score political points.

“One hundred percent of the allegations are false, this lawsuit is frivolous,” Rodriguez said. “Establishment candidate Brian Maryott is throwing out last-minute desperate attacks. Why? Because he’s losing. Polls show us leading. What does Maryott do? He panics. Yes, I’ve been named in lawsuits before, most people in business have. There’s not an elderly woman owed $500,000, this type of nonsense is right out of the Democrat playbook. I will not stoop to Maryott’s level.”

Carla DiMare, a civil trial attorney in San Diego, said that she was surprised that Rodriguez had taken the case to trial instead of settling the lawsuit in mediation.

“I’m surprised that Rodriguez didn’t settle it in mediation. If it were you or I and somebody made a cause of action like this, even if it’s not true, just considering that he’s running and all the things that go along with running and wanting to help community. You have to question even if he didn’t do this, why not settle? He could probably settle for much less than the $500,000 in question, so yea I’m kind of surprised by the approach he’s taken to the case.”

DiMare also opined that the timing of the trial in October would likely have an adverse effect on Rodriguez’s campaign against Levin should he win the Republican nomination.

“If you have a trial in October and you’re running in the general election, it’s the most crucial time in getting your message out to people. Moving to every location you can, campaigning, I mean trials are so stressful… if it’s my client I’d say you have to be in court, the jury wants to see people. I’m wondering how he’s gonna campaign and get his message out if he’s on trial, it’ll just be very difficult,” she said.

Thad Kousser, a political scientist at UCSD, said that the accusations against Rodriguez were likely to be damaging to his political fortunes moving forward, even if he wins the primary.

“Legal uncertainty never helps a candidate, especially one who is still making a first impression on voters,” Kousser said. “If you’re long time incumbent, people feel like they know you and already either trust you or don’t, having the cloud of a lawsuit probably doesn’t swing minds by itself but as one of the first two or three bits of information that voters learn about you, it may have a high impact…the questions that it raises are never helpful for a candidate trying to establishing themselves with voters.”

Kousser characterized Maryott’s move to spread information about the accusations against Rodriguez as nothing less than “Politics 101.”

“I mean it’s simple campaign strategy on Maryott’s part to bring this up — you find the most damaging information that’s truthful about your opponent, and you put that right in front of voters,” he said.

Rodriguez should focus on the positive messaging that has gotten him to the front of the pack in the primary and stay away from getting bogged down in trading accusations with Maryott, Kousser advised.

“You keep doing whatever has put you in first place in some polls among Republicans, you talk about the positives rather than the negatives, and you you refuse to engage opponents mudslinging…these are not questions that he needs to answer until there’s an actual verdict against him.”

In 2020, a similar lawsuit was filed against Rodriguez by a former real estate partner, John Hetzler who claimed that the city councilman had failed to pay back $100,000 in loans at the agreed upon date. Hetzler eventually withdrew the suit after Rodriguez apparently paid back the money owed in question. Rodriguez denied any wrongdoing in the affair.

Maryott has faced his own share of controversy leading up to the primary. In March, Bartlett filed a ballot designation complaint with the state against Maryott, accusing the former San Juan Capistrano mayor of misleading voters about his professional employment status.

Maryott later changed his ballot designation title after discussions with the Secretary of State’s Office, but wholly denied having made any false statements about his ballot status. 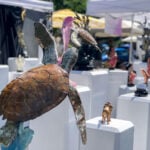