The City of Encinitas requested the loan from IBank in November 2021. File photo

ENCINITAS — The City of Encinitas received a $20 million loan on May 26 to help finance the third phase of the long-awaited Leucadia Streetscape project along a 2.5-mile stretch of North Coast Highway 101, according to a recent release.

The loan, approved by California Infrastructure and Economic Development Bank, or IBank, will help finance Segment C of Leucadia Streetscape in northern Leucadia extending from Jupiter Street to La Costa Avenue, which is expected to begin construction in November.

The entire project will take approximately three years and cost $65 million, according to IBank.

“This project will improve safety not only for drivers, but also create safe, walkable, bikeable communities, allowing more people get out of their cars and helping the environment,” said IBank Executive Director Scott Wu said in a statement. “IBank is happy to finance an infrastructure project that will directly benefit the people of Encinitas for years to come — and also increase access to a number of small businesses, which are so vital to the economy and community.”

The City of Encinitas is financing the first two phases with reserves and SANDAG’s TransNet funds generated by a half-cent sales tax in San Diego.

Construction is also underway on a new roundabout near Portal Street.

The Leucadia Streetscape project is expected to create 217 jobs during construction. Upon completion, the improved sections of North Coast Highway 101 are intended to support safer pedestrian travel through new bike lanes and wider sidewalks, allow more beach access across the train tracks and preserve historical Encinitas through reforestation. 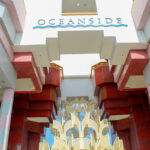 I hope that they will do a better job on the bike lane in the next phases than they did on the recently completed phase. The new southbound lane is worse than what was there before. The new car lane has nice, smooth new asphalt. That extends about halfway into the bike lane where there is an uneven transition and then the asphalt turns very rough. The uneven transition is a crash hazard for inexperienced cyclists and the rough asphalt on the right side of the lane will ensure that most cyclists ride on the left side, closer to cars.

Neither of these are huge problems, but considering it is a brand new, multi-million dollar road, they shouldn’t exist at all. It is just another example of the city telling cyclists that the city knows better when they clearly don’t. As a cyclist and Encinitas resident/tax payer I am very disappointed that my tax dollars have been spent on this shoddy work. If anyone at the city would like input from cyclists before starting the next phase, there are plenty of us to help.

Absolute insanity, there was no need for this project at all and it actually creates problems, not solves them.
Blakespear has been a disaster for Encinitas and the repercussions will be felt for years after she’s finally gone.