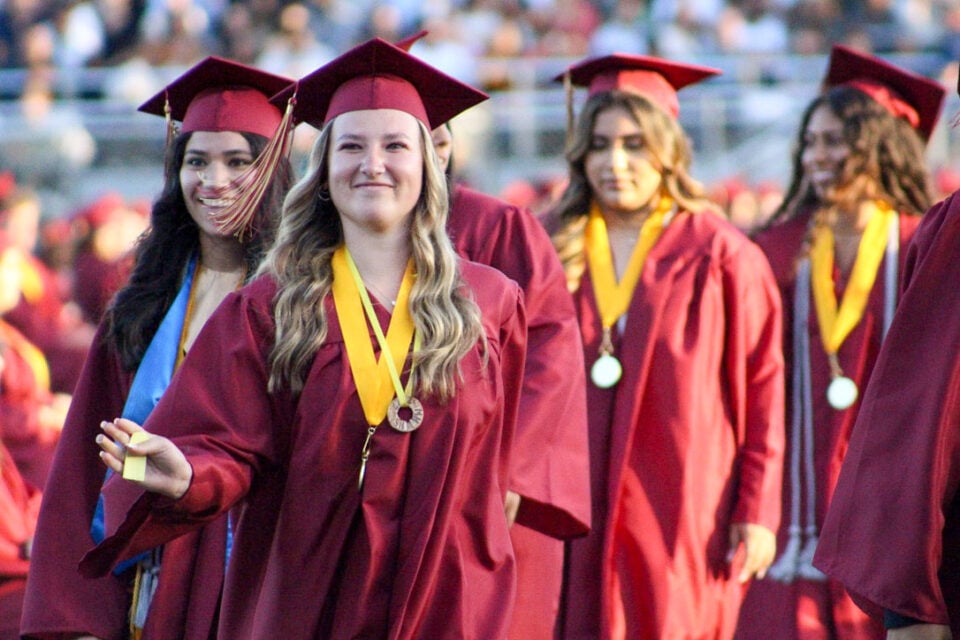 Students in the Class of 2022 celebrate June 10 following their graduation from Mission Hills High School in San Marcos. Courtesy photo

The district lost 1,100 students — around the equivalent of an entire school — in the first year of the COVID-19 pandemic, followed by another 147 students over the past year. District leaders anticipate losing another 100 over the upcoming academic year, with enrollment expected to stabilize in 2023-24.

State school funding is primarily calculated based on average daily attendance (ADA) using a three-year average. While San Marcos Unified’s funding has been stable over the past three years, thanks to an average based on pre-pandemic numbers, 2022-23 will mark the beginning of a new average period, at which point funding is expected to drop significantly and continue dropping over the subsequent two years.

San Marcos Unified is not alone in its enrollment troubles. Public school districts and charter schools throughout California saw an attendance decline of 8% between the 2019-20 and 2020-21 school years, according to a recent report from the state’s Legislative Analyst’s Office.

For public school districts, in particular, statewide ADA declined by about 468,600 students in the same time frame.

Superintendent Andy Johnsen said the district is doing its best to build back-up attendance. During the major enrollment drop in the first year of the pandemic, officials determined through surveys that many families were moving out of the region and the state due to work challenges or opted to switch to private schools.

“We are working as hard as we can to build up our enrollment, to draw students back into the district. If our enrollment declines again … the dollars coming in will be less,” Johnsen said.

The district is also waiting to see if attendance relief will be available from the state to offset the loss in funds, creating further uncertainty, Johnsen said.

While exiting the pandemic’s uncertainty is a good thing for schools, it also means the end of crucial COVID-19 aid funds from the federal and state governments, which many districts have come to rely on.

In San Marcos Unified, COVID-19 funds will expire two years from now in the 2024-25 academic year. Garcia warned the school board that while these funds are helpful now, the district should start planning how they will fare without them.

“What also happens is all the COVID federal relief dollars expire in that year. If we are using some of those one-time COVID relief dollars to pay for staff, those costs have to come back into our regularly funded budget,” Garcia said.

Dropping enrollment also had a severe impact on staffing. The district came under fire earlier this year after issuing layoff notices to nearly 200 classified and certificated staff to “rightsize” with the decreased number of students and create a positive budget.

Officials issued many of the layoff notices as a precaution against an unfavorable state education budget, with plans to rescind as many notices as possible as budget plans became clearer. Over half the notices, primarily for teachers, were rescinded over the following months, with the majority rescinded by late June.

“The layoff notices that were issued to staff on March 15 have been rescinded with the exception of approximately 20 active layoff notices; however, in the weeks ahead, we anticipate this number will continue to decline. The notices have been rescinded due to additional resignations, retirements, leaves of absences, and improved financial outlook from the state,” said district spokeswoman Amy Ventetuolo on June 27.

While many were relieved to find out they would still have jobs for the upcoming year, the back and forth caused great stress and uncertainty.

Board president Stacy Carlson called this practice of issuing and rescinding layoff notices a “systemic problem” and expressed concerns about always having to project major layoffs while awaiting the actual financial forecast from the state.

“The past several years I’ve been on the board, we’ve had these layoff notices, and then the state comes in last minute, and we get to rescind all these notices. And it’s really painful, and it really messes with people’s heads,” Carlson said.  “We really need to be careful with what we’re doing with the money we have right now. It’s unusual for me to be this concerned about the budget in terms of what’s going to happen in the next year or two and where we’re going to be.”

Following this rightsizing, employee salaries and benefits are projected to make up nearly 86% of the district’s $271 million spending budget over the next year, along with funds for books, supplies, services, and operating expenses.

The district is also planning to spend $1.1 million to obtain four new school buses equipped with cameras with money set aside in Fund 40; savings account for capital projects.

With an active budget deficit since even before the COVID-19 pandemic, San Marcos Unified has been on the state’s watch list for potential financial insolvency for some time. However, district leaders say major cost cuts via staff layoffs and other budget restructuring have improved the situation.

The district finished the school year with a General Fund deficit of $1.1 million, and staff is projecting a surplus over the next three years, including an unrestricted surplus of $5.7 million at the end of 2022-23 and $7.3 million the following year.

This is a significant improvement from a couple of years ago when the district faced a total budget deficit of $15 million in the summer of 2020 and projected to grow to $30 million by 2022. The deficit has been knocked down significantly due to cost of living adjustments and other funding boosts in subsequent state budgets and district efforts.

“Our finances are now in a much better place than they were,” Johnsen said. “Even though it was a little bit painful to get here, we’re entering next year with a much better fiscal standing than we did coming into the year.”

However, Garcia warned the district’s projected surplus is still likely to drop to $1.5 million in 2024-25 with the new ADA average and loss of COVID-19 dollars.

“We’re going to need to do a lot of very strategic planning together to make sure that we don’t start to see significant troubles in our budget that year,” Garcia said.