The bottling line at Stone Brewing in Escondido can fill 750 bottles per minute. Photos by Bill Vanderburgh

Stone Brewing isn’t just the largest brewery in San Diego County by production volume. It was the ninth-largest craft brewery in the USA in 2018 according to Brewers Association data.

Stone opened in 1996, founded by friends Steve Wagner and Greg Koch. After years of growth fueled by the aggressively hopped ales for which they are now world-famous, they left their original location on Mata Way in San Marcos (now home to Lost Abbey) and built a huge new facility in Escondido which they moved into in December 2005.

In late 2006, Stone Brewing World Bistro & Gardens (1999 Citracado Parkway, Escondido) opened adjacent to the brewery. The goal was to elevate the food served with craft beer beyond typical bar food and to accompany it with gorgeous surroundings. Given that many craft breweries, then as now, operate out of warehouse spaces, this was a significant departure from the norm. The investment paid off, and today both locals and beer tourists from all over the world flock to Stone for the beer, the food, and the ambience.

If you plan to visit Stone, a fun idea is to take a tour of the brewery before you eat. Public tours are available at noon, 2, 4 and 6 p.m. on Mondays through Fridays, and on the hour from noon through 6 p.m. on Saturdays and Sundays. Private tours can be arranged for groups. Some tickets are sold online, and some are available on a first-come-first-served basis in the store at the front of the building. Tickets are $8 and provide not just the tour of the brewery but also samples of four beers and a branded taster glass to take home. One dollar of the ticket price goes to charity (which is why the tickets for designated drivers and kids over 12 are $1; kids under 12 are free). Since 1996, Stone has raised over $3 million for various local charities.

Tours meet in the gift shop, where you can browse apparel, memorabilia and plan your after-tour tasting. There are also many Stone beers available in cans and bottles to go.

I got especially lucky when I visited on a Monday at noon in late November, when most people were planning their Christmas shopping or prepping for Thanksgiving travel: I was the only person on the tour. That meant that in addition to seeing the whole facility, including its two large brewhouses, a pilot system, and the seemingly endless fermentation tanks, I got a look at the packaging area from a balcony that visitors don’t usually get to see.

Stone sells a lot of beer, so the kegging, canning and bottling areas are large and impressively automated. Anyone who has ever washed kegs at a small brewery will be jealous of the automatic system that does the job at Stone. The canning line is the newest piece of equipment and fills about 450 cans per minute at full capacity. The bottling line fills an even more impressive 750 bottles per minute. Long conveyors, including spiral ramps, bring bottles and cans up and down levels to be filled and packaged.

The completed packages are then palletized by a robotic system and prepared for loading onto Stone’s own trucks for distribution. Stone self-distributes its product, which helps to get the beer to consumers fresher and ensures that they have complete control over how the product is handled from packaging to sales point.

For anyone interested in engineering, machinery or large manufacturing businesses, the Stone tour is worth doing even independent of the fact that great beer awaits you at the end.

The food in the Bistro is a real treat. I had a chicken schnitzel that was very good, and it came with what I am pretty sure was the best potato salad I’ve ever eaten.

Whether you dine inside or on the large patio, complete with koi ponds, be sure to take a lap of the whole grounds. It feels like a world apart, a secret garden, with a variety of different trees, ponds, waterfalls and rock features. There are various seating areas, some lawn chairs, and on busy days a beer cart so you don’t have to go all the way back inside for your next refill.

Stone didn’t need to make such a lovely space, nor such a good restaurant. They could have simply let the beer do the talking, and they still would have been successful. The fact that they chose to go the extra mile shows why they are such a good company making such good beer and is something beer lovers can be grateful for.

For more information or to book a tour see https://tours.stonebrewing.com/. 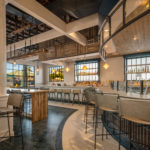 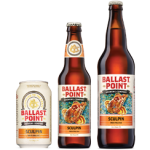