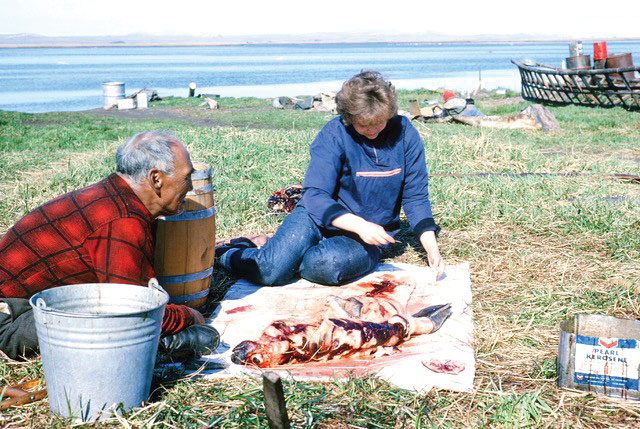 Author Deanne Burch was expected to live as the Native Alaskans did when she accompanied her anthropologist-husband on his months-long trips to Alaska’s far-north wilderness. Here her Kivalina neighbor Austin Thomas gives her lessons on skinning and cutting up a seal, which Inupiat depend on for clothing, food and fuel. Photo courtesy Deanne Burch

Deanne Burch is a master of understatement.

“It was not the best camping trip I’ve ever had,” says the author of “Journey Through Fire and Ice: Shattered Dreams Above the Arctic Circle,” in a phone interview from her home in Lemoyne, Pennsylvania

Burch is commenting on the trip in November 1964 with her then-new husband during which they pitched camp 80 miles above the Artic Circle and came perilously close to freezing to death.

Their Coleman stove, a paltry source of heat anyway, breaks, and the substitute fire her husband builds burns down their tent. Then Burch twists her knee and is unable to walk.

In her memoir she writes that “(my husband) hitches up the dog sled…picks me up and puts me on it. He covers me with sleeping bags to keep me from getting hypothermia…I see my life passing before me – all twenty-three years. This is what it must be like to die.”

This is just one of several harrowing experiences recounted in “Journey,” a first-person account of Burch’s trials and adventures while living with husband Earnest “Tiger” Burch, a renowned Arctic anthropologist, in a remote Inupiat village.

Kivalina, population 150 in 1964 (today 444), sits on a tiny strip of barrier island in Alaska’s far northwest. Tiger was conducting research on the kinship structure of native residents for his doctorate, and Burch “like any good wife in the 1960s, followed my husband’s dreams.”

“What I really wanted was a conventional life — a house with a white picket fence, a dog, and at least three children,” she confesses.

Burch would eventually have all this, but not before the path to her dream took a few detours. She not only accompanied her husband to Kivalina, but was expected to live as the villagers did, in a small house with no electricity or running water, and to participate in their way of life — drying fish and skinning seals.

“Tiger also expected me to contribute to (his research),” she says. “In all honesty, I hated it, but it did contribute to his study.”

Burch also was expected to socialize with the women, who culturally were not conversationalists.

“The women didn’t talk that much,” she says, “but when I worked with them, I learned a lot about the way of their life. Young girls there learned by watching and they expected me to do the same.”

Despite the obstacles, Burch made some lifelong friends with whom she stays in touch.

The largest issue for Kivalina residents today, she says, is climate change, which will necessitate relocating the village because of rising water levels.

Scientists predicts that the village will be claimed by the sea by 2025.

Burch’s story, which focuses on two long-term stays in Kivalina in 1964 and 1965, is filled with an array of learning experiences and emotions — love, fear, joy, confusion and, sadly, tragedy.

One catastrophic event changes the young couple’s life forever, and may partly explain why, despite a stellar career, Tiger takes his life in 2010.

Why did Burch write the book?

“Everyone asks that,” she says. “I think it was just something I wanted to do, at first for my children, but then I decided I wanted more people to read it. My husband didn’t want me to do it. He thought I might be negative about the (Native Alaskans), so I waited until after he died.”

Burch’s memoir actually shows a deep admiration for the ability of the people of Kivalina to survive in their harsh environment, partly because Burch experienced their way of life to the fullest.

“I think that the one thing I want people to realize is that when you go and live in (different) culture, you learn a lot,” she says. “Also, if you have a tragedy in life, you can really triumph. Tiger could’ve crawled up in a hole and died (after the accident), but he didn’t. We both became stronger for it.”

In the small-world/full disclosure department:  As I was finishing this story, I called my Alaska cousin, Panu Lucier, to ask about a point of grammar regarding references to the Inupiat.

Panu’s mother was Inupiat, raised in the native village of Wales (population 150), in the furthest possible northwest corner of Alaska.

When I mentioned this book and the author, she knew exactly who I was talking about. Her father, Charles V. Lucier, who arrived in Alaska in 1942, was dedicated to studying and documenting Inupiat culture and collaborated numerous times with Tiger Burch. May Gray, June Gloom and other summertime blues