Jake Tilley, left, and Chris Guynn, both of Oceanside, qualified for the 2020 U.S. Golf Association four-ball championship at the Philadelphia Cricket Club after tying for first at a regional qualifier on Oct. 11. Steve Puterski photo

OCEANSIDE — It is the mountaintop for amateur golfers and two local residents made the cut.

Chris Guynn, 44, and Jake Tilley, 25, both of Oceanside, and Jeff Koprivetz and Pete Williams, both of San Diego, tied for first at the 2019 Southern California qualifier to claim spots at the 2020 U.S. Golf Association four-ball championship at the Philadelphia Cricket Club, the oldest golf club in the U.S.

The two, two-man teams each shot 6-under par 71, 6,625-yard Vista Valley Country Club on Oct. 11 to qualify for the most prestigious amateur tournament in the country.

“It was more of let’s just go out and having a good time and see what happens,” Guynn said. “That was my mindset going into it. And maybe it’ll fall into place, and it kind of did.”

Guynn and Tilley, who are also members at El Camino Country Club, met several years ago, but both took similar paths into golf, albeit nearly 20 years apart. Guynn, a graduate of El Camino High School and digital marketing professional, began his athletic career on the baseball diamond.

However, in high school he gravitated to golf and played on the varsity team for three years.

Tilley, meanwhile, is an Oceanside High School grad and handyman, who also was once a regular on the diamond. Like Guynn, he moved to the links and his game took off.

They paired up several years ago after a mutual friend, Rico Latasa, introduce the two. Since then, Guynn said, when there is a two-man tournament the duo will pair up.

Four-ball is a best-ball format where the best score of one of the two players is recorded. But on Oct. 11, the duo had no real expectations, especially at the notoriously tough and narrow Vista Valley course.

Their round started with a par, but Guynn found himself in trouble landing in the sand trap on the second hole. However, he chipped out for birdie, which gave the two some momentum, Tilley said. Guynn was the lowest individual scorer for the tournament as well, shooting a 68 for 3-under par.

He then chipped out of a bunker on the fourth hole for birdie and the two were off to the races. They closed the round with birdies on 15 and 17, which is when they figured they may have a shot to qualify.

“After that, it was slow and steady, ham and egging it,” Tilley said. “In the holes he was in trouble, I was there to save it. We just played very well.

Only the winning team gets the coveted berth, but Guynn and Tilley knew they were close. Once they closed out the round and the wind started to pick up, the two were confident they had pulled it off.

“We got through the front nine and felt we were in a really good spot,” Guynn said. “I knew we were doing alright. Near the end of the back nine, I knew we were in good shape. It took me a couple days to realize what we had done. It was kind of surreal.”

As for the national field, Guynn and Tilley are two of 10 from California and 256 players (128 teams) across the country, according to Joey Geske, a communications coordinator for the USGA.

The national tournament is a four-day competition, although Guynn and Tilley, along with the rest of the field, must make the cut. They will play on two courses, one a par-70, at 7,057 yard and the other a 7,202-yard, par 72.

“The first two days are stroke play, and then the top 32 sides (64 players) advance to match play for the following three days,” Geske said. “The entire championship consists of four-ball format, meaning the two players in each side play their own ball, and then the best score amongst the two is taken for the team score.” 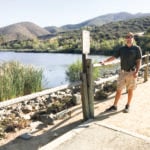