OCEANSIDE — Nearly a decade since it was first proposed, construction of the Oceanside Beach Resort is about to begin.

According to developer and property owner S.D. Malkin Properties, the resort will feature a 226-room full-service hotel on the south block of Pacific Street and Mission Avenue, and a 158-room boutique hotel on the north block.

Both hotels will contain “multiple restaurants and bars” and more than 22,000 square feet of interior meeting and function space.

“We plan to start within 30 days,” said Jeremy Cohen, director of S.D Malkin Properties, via email.

The resort is scheduled to open in 2020, but it was first approved in 2009. It was then that S.D. Malkin Properties reached a development agreement with the city with the expectation that the former city Redevelopment Agency would issue tax allocation bonds.

The recession and financing difficulties delayed the project, as well as the end of redevelopment agencies in the state. The city negotiated a new agreement to sell the property to S.D. Malkin and to share proceeds of the transient occupancy tax generated by the hotels.

Then a lawsuit challenging the tax sharing agreement delayed the project even further, although the city eventually won in trial court and court of appeal.

In late 2017, S.D. Malkin announced it would begin construction in April of this year, but rising costs delayed construction even further.

Currently sitting on the property is a parking lot, an empty field and the historic Graves House, also known as “Top Gun House” for its appearance in the 1986 movie.

Cohen said the house will be moved off-site, renovated and returned to the open space facing Pacific Street on the property. It will be converted into an ice cream shop, Cohen confirmed. 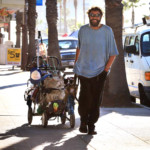 Committee to address homelessness in Oceanside