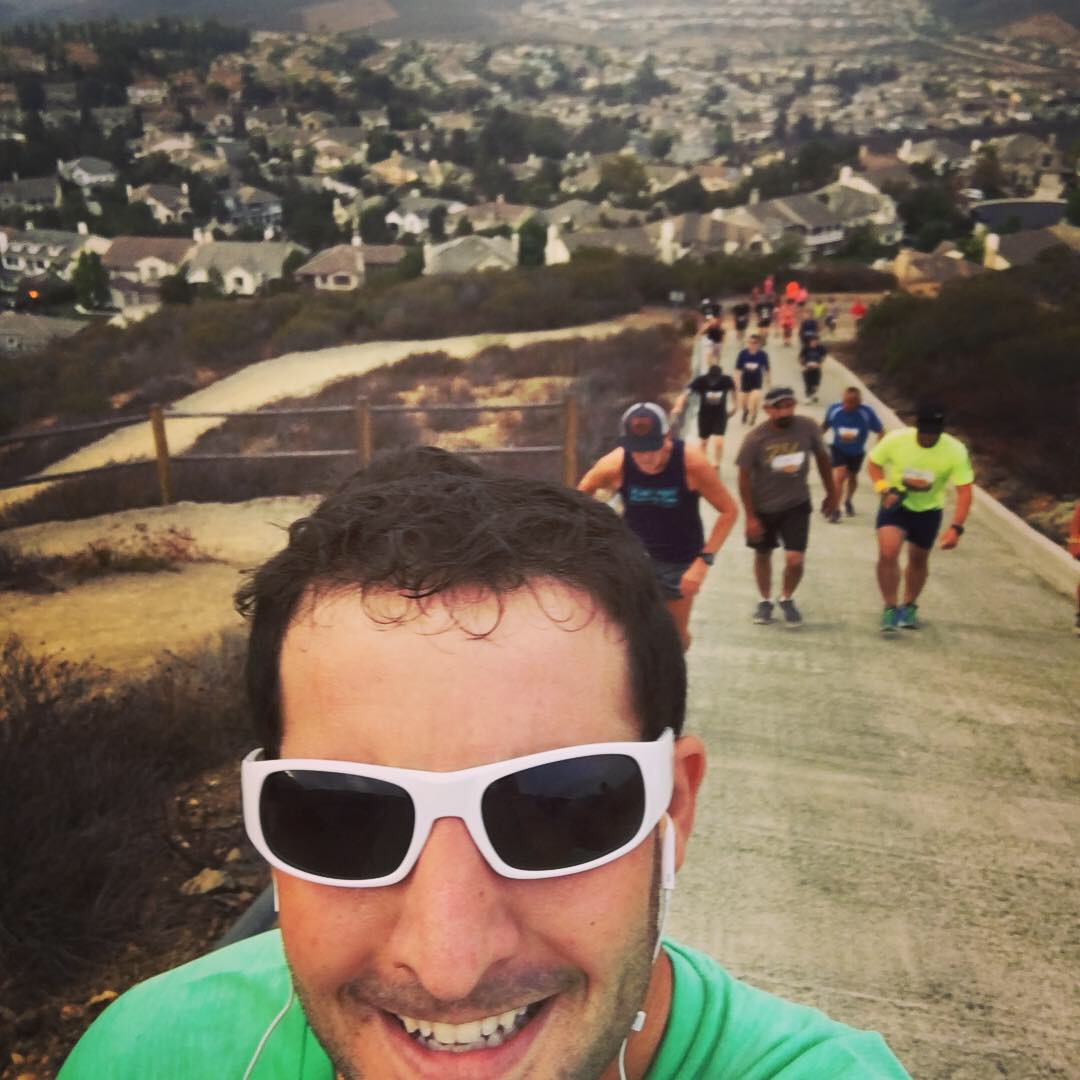 SAN MARCOS — It’s 5:30 a.m. on a Saturday morning. The alarm goes off and I think, “What in the heck am I getting myself into?”

As a longtime long-distance runner, it’s a thought I’ve had at this strange hour of the day too many times to count. With nine marathons under my belt and just about as many half marathons, myriad 5K road races and far more than a handful of track and cross countries races as a high school and collegiate runner, questioning my sanity the morning of race day and the night before it is nothing new.

But San Marcos’ Double Peak Challenge — a 10K (6.2 miles) race which takes runners up two mountain peaks and over 1,100 feet in elevation worth of climbing, the fourth annual edition of which unfolded on Sept. 29 — takes things to a whole different level. And in fairness, the Double Peak Challenge organizers don’t hide that fact.

“Possibly the most challenging 10K distance course in San Diego County,” bluntly reads the race’s website. “The multi-surface paths through San Elijo Hills/Double Peak offer runners the option of running on asphalt or decomposed granite. Make no mistake, this out-and-back course is steep, but runners are rewarded with panoramic views of the entire north county and a breathtaking summit halfway point.”

So, it was with great reverence which I approached the course on race day. I had no illusions that I’d hit a personal record (36 minutes) or come anywhere near it. In fact, I’m too out of shape these days to come anywhere near my prior days of running glory anyway, even on the most pancake flat of courses.

Further, this was the first race of my entire running career in which I knew it’d be a run-walk affair, and it turns out that was in the cards for the vast bulk of those who finished the race alongside me, as well. The hills are just too darn steep, long and unyielding for all but the most lean, fit and well-trained runner to complete the out and back circuit by running the whole time.

As it turns out, I ran a personal worst 10K time. Indeed, it was even slower of a pace than I’ve ever done an easy training run of that distance. For that matter, slower than even a single mile of a training run in my entire life.

Those I spoke to for the story shared similar stories about the course’s difficulty.

Michelle Lawson, 48, said that when she entered the Double Peak Challenge she “had no idea it was uphill,” registering on a whim because her family had just moved to San Marcos.

“You go straight uphill and a lot different than the treadmill,” Lawson told The Coast News. “The sun’s beating down on you and all I remember is that when I saw mile one, I thought it should’ve been mile three.”

Lawson said she had to run-walk the first half, but then passed many people during the mostly downhill second half of the race. Her daughter Lauren Lawson, 18, had a comparatively suboptimal race day experience, having to drop out of the race after about a mile and get a ride home from a volunteer.

It “was unlike any run I’ve ever experienced before. As soon as we started, I could see the hills we were going to have to overcome and knew I’d be forced to walk most of it,” she said. “As the elevation increased, I felt so much anxiety and sickness. It was the most grueling, impenetrable path I’ve ever run on.”

Winner Alexander Sakelarios, 23, and a student at San Diego’s City College, said that he had a goal going into the race of breaking the course record, but felt it was impossible after experiencing the first mile.

Running with a small lead pack until mile two, Sakelarios said he put in a surge at that point and never gave back the lead thereafter. That surge and the crowd support gave Sakelarios, a first time Double Peak Challenge racer, the adrenaline boost he needed to shatter the course record. He told The Coast News he will return in 2019 and make an attempt at breaking his own course record.

While a supremely challenging road race, for the race conveners, the event means far more than that.

Martin said that the Double Peak Challenge is such a great community event and gathering for the entire city of San Marcos and that the city hopes to keep it going for years to come. Two council seats and mayoral office up for grabs in Vista Two Encinitas districts up for grabs in historical vote