ESCONDIDO — A 55-year-old woman was killed Tuesday night after driving through crossfire, according to Escondido police.

Catherine Kennedy was struck in the head after she was reportedly driving home from a church function, according to Escondido Mayor Sam Abed.

Witnesses interviewed at the scene believe the shooting may have been gang related, although police have not identified any suspects.

According to the EPD, Kennedy was driving on the 1800 block of East Grand Ave. close to Midway Drive around 9:09 p.m. when she was struck by the bullet. Witnesses reported two men on opposite sides of the street began shooting at one another as Kennedy’s car drove between them.

Her car, a silver Toyota Camry, then collided into a parked vehicle. Kennedy was found alive, but died after being transported to Palomar Hospital, according to police.

“Gang violence will not be tolerated,” Abed added.

Carter, meanwhile, said the “thugs” and “gangsters” who committed the crime will be found and arrested. He also said there are gang members who know who shot Kennedy and urged those individuals to anonymously contact Crime Stoppers to relay any information.

Carter’s said the reason for his plea to the gangsters who have information is because “they have parents.”

“Somebody in that community knows what happened,” he added. “If you have information, even a little, it could help.”

Carter also railed against the apartment complex, Pepperwood Meadows for renting to criminals and gang members. He said the police will do everything in their power to discontinue those practices.

Carter said the apartment complex has been an issue for years as the area has become a location for gang activity. 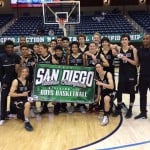