The Merlot grape is grown on more than 720,000 acres worldwide. It is reported to be the second-leading red varietal after Cabernet Sauvignon. Courtesy photo

Fifteen years ago, an intoxicating wine movie comedy with little fanfare except word of mouth caught fire. It was “Sideways,” about two frustrated sidekicks on a bachelor’s last days spent guzzling wine along the Central Coast of California.

For some unknown reason, the movie savaged Merlot in both words and deeds, resulting in a stunning 25% drop in sales that year.

In the movie, Miles, the character who hated Merlot, secretly owned a never-opened world-class Merlot bottle, a very expensive Right Bank Bordeaux French legend named Petrus. In a fit of anger and frustration over a lost book publishing deal and a lost love, he gulps down the Petrus with a burger at a McDonalds.

At its best, Merlot is a beautiful round and supple grape. It is sometimes characterized as the flesh on Cabernet Sauvignon’s bones. Proof of this might be the fact that most red blends start out with Cab but make sure that the next choice in the blend is Merlot. Some serious top-notch producers make intensely flavored, big, complex Merlots. We will review some below.

Merlot’s golden years were the pervasive ’90s. You didn’t buy a bottle of wine for a fine dinner; you bought a Merlot. That “bubble” of production led to copycat bottles by two-bit growers peddling cheap, soft tasting bland Merlots.

So “Sideways” was simply the punch-out in a wine balloon that had to burst to be eventually better. And better it got … so much so that in 2017, a Duckhorn with Merlot grapes from their Three Palms Vineyard in Napa Valley, was awarded the No. 1 wine in the world by the most respected wine publication in the world, Wine Spectator. Spectator praised the wine as “an easy-going red of generous fruit and texture. Its subtle tannins make it perfect for early drinking that allows it to pair with a wide range of foods.”

The Renaissance of Merlot is being celebrated in October in a monthlong recognition of its achievements in the wine world. The rallying cry is #MERLOTME, a global movement reaching millions of wine lovers. First, get your hands on some fantastic tasting Merlot. I have a few suggestions.

Inspired after a visit to Bordeaux, Dan Duckhorn produced the first vintage of Duckhorn Vineyards Napa Valley Merlot in 1978. A splash of Cabernet Sauvignon in the current 2017 vintage adds notable depth and structure, as well as creative flavors of black cherry, plum and spice. ($56)

St. Supery is a Rutherford Merlot in Napa Valley and sports a rich black plum and chocolate tasting sensation for its 2016 vintage. ($50) This was a near perfect growing season as this column has frequently enthused about. St. Supery ages its Merlot for 19 months for added layers of complexity. The wine is sustainably farmed and given optimal hang time. Sorting by cluster, then by berry, ensures a well-balanced Merlot.

Up Washington way, a stop at LeEcole No. 41 in Walla Walla is all you need to

confirm the quality of Merlot in this district. We tested the 2017 Estate grown Merlot. The winery was a school at one time, and proudly proclaims their Merlot as certified sustainable and salmon safe. The wine delivers great structure, color and balanced acidity. A beautiful Indian summer brought in plenty of sunshine for the October harvest. ($37) 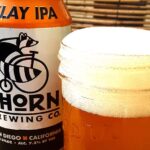 Cheers! North County: Core beers — the foundation of every brewery