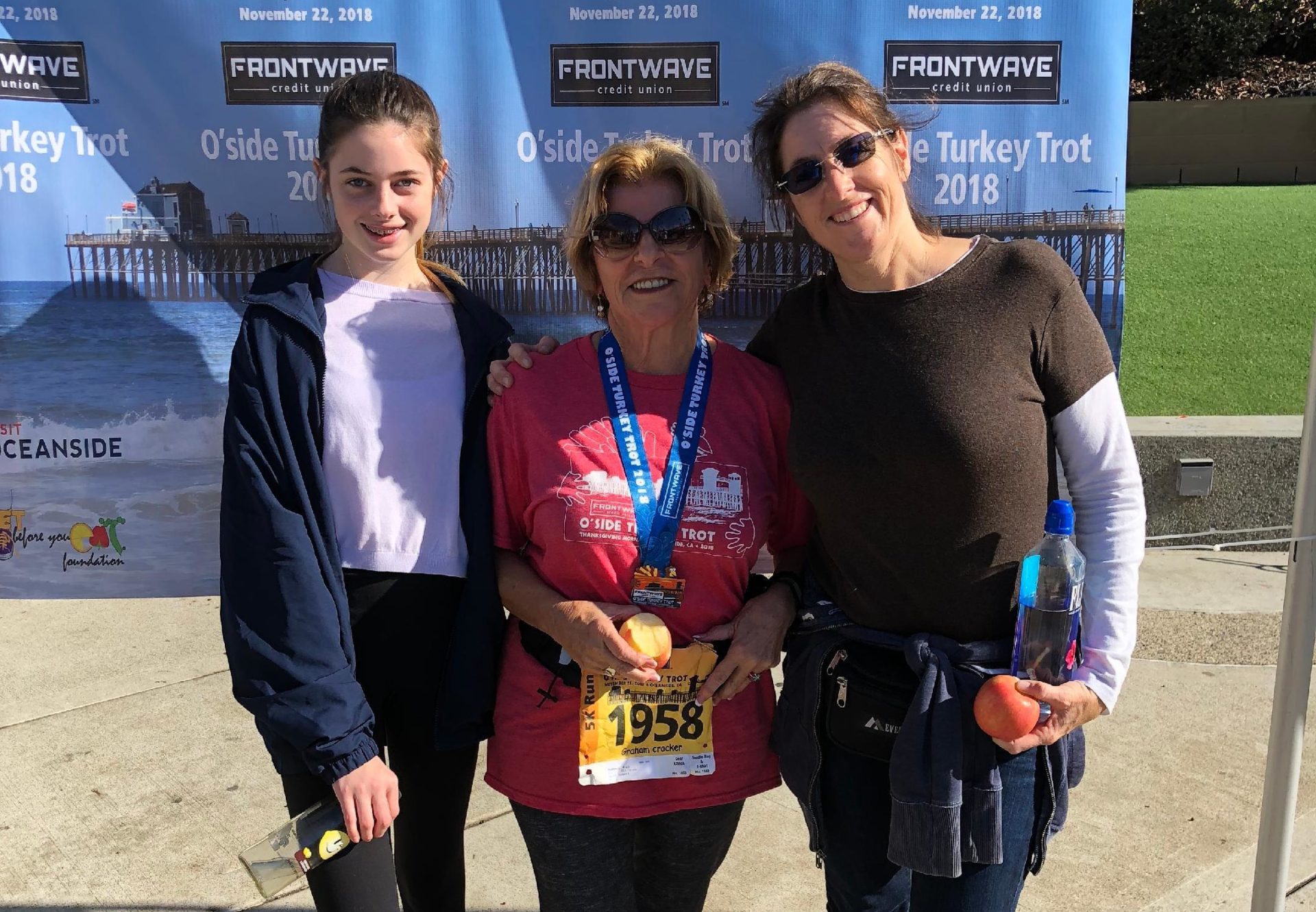 Fran Rettberg is set for the 14th Oceanside Turkey Trot, her conditioning up to speed.

“I don’t train,” she said with a hearty laugh.

No, but at 78 years young, Rettberg is always on the go. Pinning her down for a chat is like trying to put toothpaste back in the tube.

Rettberg grins and it’s clear she’s ready for her annual jaunt through the seaside streets. The Turkey Trot, featuring a five-miler, a 5K and a one-mile senior walk on Nov. 28, is a Thanksgiving morning tradition that encourages people to move their feet before they eat.

Rettberg would no more miss the event than forgo telling another tale.

Maybe, but it produces one compelling story after another for Rettberg and her numerous adventures. She was just in from conquering the Fallbrook Golf Club, or was it the other way around.

“That is a real long and hard course for a woman,” she said. “I survived but it often took me six shots to get to the green.”

One would have to look far to match Rettberg’s spunk. She used to play softball, raised three daughters (Polly Hysell, Kim Convy and Lori Lucas), hiked the Grand Canyon at 70 and has persevered in a life, like everyone’s, that has had its ups and downs.

The running bug bit in 2006 with her first Turkey Trot. Although “running”  might be a stretch.

“I walked it with a bunch of friends because I really didn’t know what it was about,” she said.

That the spry and engaging Rettberg was surrounded by buddies, and strangers that soon became pals, isn’t surprising.

“Fran’s effervescent smile and her kind words to all of our participants is always evident when she comes to trot,” Kathy Kinane, Turkey Trot race director, said. “She simply glows when trotting along.”

Walking was cool that first year but Rettberg soon found another gear. She discovered her stride and it was so keen that she won seven titles and produced two runner-up finishes in her age-group.

“One year I didn’t get anything,” she said with a chuckle.

But everyone gets something when shaking their tail feathers in the Turkey Trot. The 9,000 participants can reach for a second helping of vittles later at their Thanksgiving feast and local kids are benefactors, too.

The Miles of Smiles Running Program encourages North County students to pick up their feet with the Turkey Trot picking up part of the tab. More than $340,000 has been earmarked for kids to go left, right, left, instead of point and click.

“I’m all for that,” Rettberg said. “These kids are playing video games all day and they don’t know how to move anymore. Some of them are worse than me.”

Rettberg isn’t worse for the wear of her active lifestyle. That includes hiking the Grand Canyon, rim to rim, in 14 hours.

“That was one of the biggest accomplishments of my life and it really took a lot of endurance,” she said. “But no one was going to carry me up.”

Rettberg carries on the proud tradition of her husband, Thomas Rettberg, by serving as a volunteer with the Oceanside Police Department. He was a helicopter pilot with the Utah Highway Patrol and lost his life in the line of duty in 2000.

That sent the wheels in motion to move to Oceanside, which she had visited on summer vacations since the 1950s. She’s been a community staple the last 16 years and is a hoot to visit with, if you can get her to stand still long enough.

Back surgery has her back walking the course, which is a blessing because more runners can get the run-down on a life well-lived.

Rettberg’s can-do spirit is another example of the soul of the Turkey Trot, when soles are picked up and put down in the hopes of raising funds for children to do the same. Patio Playhouse to premiere show About Hanukkah and Las Posadas