There are 30 trails of varying difficulty at Aliso and Wood Canyons Wilderness Park east of Laguna Beach. The park, at more than 1,000 feet altitude, offers a 360-degree view of the coast, Orange County and beyond. Photo by E’Louise Ondash

It’s been a year since the powers-that-be declared the planet a pandemic-plagued place and people woke to find that normalcy had vanished.

It was in March 2020 that every facet of our lives changed and the New Normal arrived. For too long, even the parks, beaches and urban trails were off-limits to humans. We were relegated to walking our neighborhoods, which was more than some countries allowed, so we tried to be grateful. But honestly, that did get old.

Now, “light at the end of the tunnel” is an oft-heard phrase and we’ve begun stepping out beyond our subdivisions with guarded optimism.

To celebrate — no, let’s just say to mark — the one-year anniversary and a partial return to moderate normalcy (notice that I’m being cautious), we met with friends Brian and Sandy to explore the Aliso and Wood Canyons Wilderness Park, east of Laguna Beach in Orange County, about a 40-minute drive from Oceanside.

Our friends were familiar with the park; we weren’t. First impression: Who knew there was so much open space in Orange County?  As in 4,500 acres, 30 miles of trails, two year-round springs, some rare vegetation, an animal preserve and killer views.

These acres of open grassland, rugged coastal canyons and riparian woodland once were a major wintering spot for two Native American tribes who were eventually relocated by the Spanish to the Mission San Juan Capistrano. After Mexico won its independence from Spain, the area was divided into private land grants.

In the first half of the 1900s, herds of sheep grazed on the hillsides, and in 1979, developers donated 3,400 acres to Orange County. Further land acquisitions and donations expanded the park to its current 4,500 acres.

Kudos to those who had the foresight to preserve this land; we know the surrounding cities would have expanded ad infinitum if given the space and opportunity.

We parked at the aptly named Top of the World Park (officially Alta Laguna Park), which belongs to Laguna Beach. A grassy haven with a playground, shade trees, picnic tables and well-maintained restrooms, this small park next to the big park sits at 1,036 feet and offers a view of much of Orange County on a clear day, which it was. From this perch, we also could see San Clemente and Santa Catalina islands, the surrounding suburbs, foothills and mountains, Camp Pendleton to the south, and the Los Angeles County line to the north.

A sumptuous combination of cirrus, cumulus and cumulonimbus clouds mushroomed across the sky like a bomb had been detonated, and though we could see some fierce weather across the distant landscape, we remained dry.

Walking the park’s trails was like opening a Christmas present. An easily readable map lets hikers choose their levels, from easy to difficult. The trails are wide and clean, and although there is evidence of some erosion from earlier rains, there is still plenty of path for social distancing.

With the perfect weather and 360-degree views, it was difficult not to gloat a little knowing that a goodly swath of the country would soon be in the grips of a blizzard.

To round out the perfect day and to reward ourselves for conquering the hills, we enjoyed a late lunch at The Cliff Restaurant, so called because diners sit on multi-level decks overlooking a 180-degree panorama of Laguna Beach. The food was equal to the view. 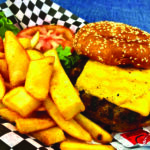 Lick the Plate: Diving out at One More That’s It